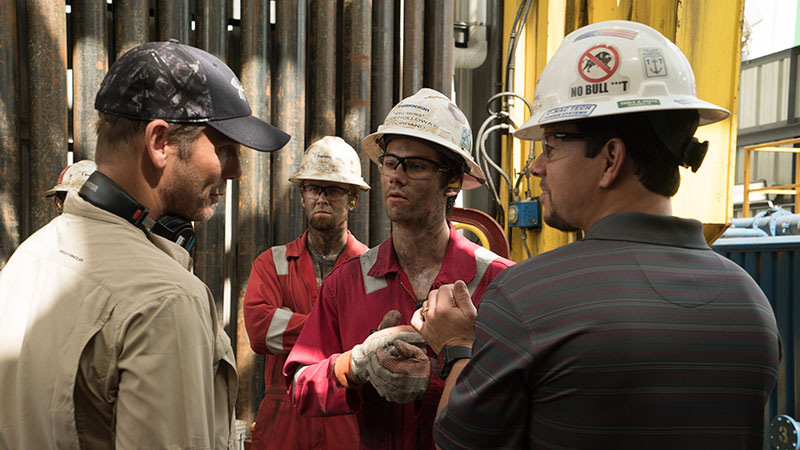 On April 20th, 2010, one of the world’s largest man-made disasters occurred on the Deepwater Horizon in the Gulf of Mexico. Directed by Peter Berg (Lone Survivor), this story honors the brave men and women whose heroism would save many on board, and change everyone’s lives forever. 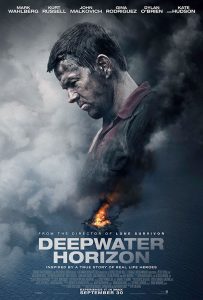 Some directors might have calculated that the sheer complexity called for extensive CGI, not Peter Berg. He felt it was important to build a working set that would bring not only cast and crew but also every person in the movie theatre into the intense environment of the Deepwater Horizon. It was no simple procedure, however, to get that right.

Deepwater Horizon brings that story to the screen with a gripping glimpse into the unseen world behind the global disaster that took the lives of 11 workers. Filmmaker Peter Berg once again collaborates with Oscar® nominated actor Mark Wahlberg sharing an untold story of men & women, real life heroes, who faced extraordinary consequences with extreme bravery. The pair previously explored a Navy SEAL team mission gone wrong in the Oscar® nominated Lone Survivor, and the duo is set to release PATRIOT’S DAY, the story inside the dramatic events leading up to and after the Boston Marathon bombing later this year.

Wahlberg takes on the role of real-life Transocean chief electronics technician Mike Williams, a devoted family man who was overseeing the rig’s computers and electrical systems on April 20th, when everything he imagined could go wrong … did.

The real Mike Williams, who consulted on the film, says the commitment of Wahlberg and the filmmakers to the reality of what he went through was gratifying: “The cast and crew captured all the elements of what happened that were important to me, other survivors, and the widows of the deceased.”

Mark Wahlberg and Williams bonded before the film started shooting and spent a lot of time during production on and off set together. The filmmakers were excited by the resulting performance. Says producer Lorenzo di Bonaventura: “What Mark brings is honesty and a real sense of blue-collar integrity. He brings out that American ethic of doing hard work, even when you’re working amid forces you can’t necessarily control.”

As for their personal conversations, Wahlberg describes their depth: “We talked about everything. We talked what he did before he was on the rig, about how he spent his time off the rig, about his relationship with his daughter and wife. At times, he got quite emotional talking about what happened on the rig, but there wasn’t anything he wasn’t comfortable talking about with me.”

Equally key to the casting was finding the film’s “Mr. Jimmy,” Jimmy Harrell, who was the offshore installation manager of the Deepwater Horizon – essentially in charge of the entire crew. Golden Globe® nominee Kurt Russell, another star renowned for his real-guy appeal, stepped into the poignant role. Russell felt the weight of portraying a real person in his performance. He spent hours watching Harrell’s testimony before the Deepwater Horizon Incident Joint Investigation. “Any time you play a character drawn from a real person, you have the responsibility to find out as much as you can. Unfortunately, I was never able to meet Jimmy, but I saw a lot about him as a person from the testimony that I watched,” Russell explains.

Russell especially loved working so closely in concert with Wahlberg, who becomes Mr. Jimmy’s savior after the blowout. He also enjoyed the sparks in his interactions with John Malkovich as BP “company man” Donald Vidrine. “Malkovich is just terrific as Vidrine,” says Russell.

After the explosion, Mike Williams aligns himself closely with 23 year-old rig worker Andrea Fleytas, with whom he finds himself trapped on the fire-choked rig, with no easy escape. Fleytas is played in an intriguing departure by “Jane The Virgin” star Gina Rodriguez.

As Mike Williams fights to stay alive on the Deepwater Horizon, his wife can only watch in shock from their onshore home, hoping her husband survives the nightmare their family always hoped would never come. Taking the role of the woman who motivates Williams is Golden Globe winner Kate Hudson.

To dig into the lives and hearts of the men and women for whom the Deepwater Horizon was at once home, workplace and a perilous trap after the blowout would require intensive research. The events were complicated, contested at times, and involved highly specialized machinery and jargon. All of that became background in the screenplay by Matthew Carnahan and Matthew Sand, which instead put the life-and-death experiences and in-the-moment emotions of the crewmembers front and center.

The foundation for the screenplay was a seminal New York Times article: “Deepwater Horizon’s Final Hours,” written by David Barstow, David Rohde and Stephanie Saul, which was in turn the result of probing interviews with 21 survivors, as well as sworn testimony and written statements from others, creating the most detailed insiders’ account of what they saw happening, second-by-second, on the rig.

Sand recalls reading the article on the edge of his seat, but he wasn’t sure at first if he saw the heart and soul of the kind of movie he aspires to in it. Then he saw an interview with Mike Williams. “Mike was talking about the moment on the rig when he saw the rescue boats were only half full and he made the decision to go back into extreme danger to help his brothers and sisters back to safety,” Sand remembers. “That was a profoundly cinematic moment right out of real life.” Carnahan then went further, conducting and distilling his own interviews, focusing in on the emotions, connects and love of life that drive a person to find the heights of skill, bravery and compassion in the midst of disaster. The result became a moving exploration of how ordinary people commit extraordinary acts when it matters most.

Producer Mark Vahradian says that director Peter Berg’s skill with technology and action was a big draw; but the biggest draw of all was his ability to tell moving stories about unsung heroes.

From the start, the filmmakers of Deepwater Horizon had a resolute commitment to shooting in Southern Louisiana, amidst the people and colorful, tight-knit communities these events affected so powerfully. Working in such close proximity to the Gulf also allowed the production to bring aboard a slew of current and ex-oil workers in roles ranging from welders helping to build sets to extras for the evacuation scenes. They, in turned, helped to bring to life the unique working culture of an advanced, exploratory industry that brings together tough blue collar workers, brainy engineers and high-pressure corporate honchos.

The most daunting sequence of Deepwater Horizon loomed over the production from day one: replicating the unthinkable moment of the blowout, which included explosions, fireballs, mud blowing at 10,00 psi of pressure and an oil and gas plume shooting 600 feet in the air.