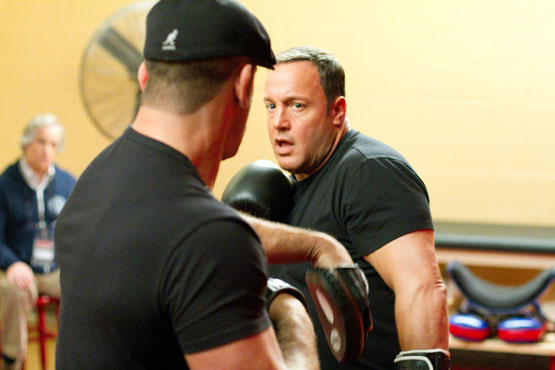 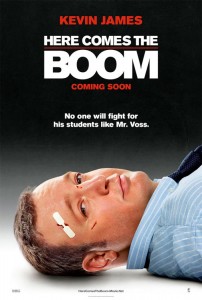 The film reteams Coraci with production designer Perry Andelin Blake for their fifth collaboration. “The movies Perry and I have done in the past have called for very stylized and designed looks,” says Coraci. “We were excited that this film allowed us to go for a more gritty, realistic look.”

In the comedy Here Comes the Boom, former college wrestler Scott Voss (Kevin James) is a 42-year-old biology teacher in a failing high school. When cutbacks threaten to cancel the music program and lay off its teacher (Henry Winkler), Scott begins to raise money by moonlighting as a mixed martial arts fighter. Everyone thinks Scott is crazy – most of all the school nurse, Bella (Salma Hayek).  But in his quest, as Scott becomes more and more committed to fighting for the students, he becomes a sensation that rallies the entire school.

“It’s a Kevin James comedy, so of course there are big laughs, and since it’s set in the world of Mixed Martial Arts (MMA), it has great action, but it’s also an inspirational story with a lot of heart,” adds Frank Coraci, the director of the film.

James created the character of Scott Voss, a high school biology teacher who gets into the Octagon when his school’s music program is threatened.  “He’s not fighting for himself – he’s doing it for another teacher and the kids,” says producer Todd Garner.

Why Mixed Martial Arts?  “I’ve always been a fan,” says James. The sport, combining various fighting techniques – boxing, kickboxing, karate, jiu-jitsu, judo, myriad kinds of wrestling, Muay Thai, and more – into an exciting, wild fight, now ranks as one of the world’s most popular sports.  “I became a fan back in 1993 when Bas Rutten was fighting, and I’ve watched every event I could since then.  I’ve been able to meet a lot of the fighters – not only are they great people, but family people, guys you might not expect would be battling it out in a cage or in the Octagon.”

Salma Hayek joins the cast as Bella, the school nurse.  “Bella is the nurse at the school when they get the news that they are going to lose one of their most amazing programs – the music program,” she says.  “They come together under Scott’s leadership – she’s going to be the nurse who patches him up after every fight.”

To train for his role, James worked with a number of real MMA trainers who taught him each of the different disciplines he would need to show on screen.  “Ryan Parsons, the film’s fight consultant, organized all of my training,” he explains.  “We went with guys like Danny Perez, who’s a professional boxer; Mel Menor, a Thai kickboxer; and Jason Lambert, who also played my double in the movie.  They all worked with Garrett Warren, our stunt coordinator and second unit director, to block out all the fight scenes.”