I Am Number Four is an  American teen science fiction film, directed by D. J. Caruso, starring Alex Pettyfer, Timothy Olyphant, Teresa Palmer, Dianna Agron, Kevin Durand, and Callan McAuliffe. The film is based on the novel I Am Number Four, written by Jobie Hughes and James Frey, with an adapted screenplay by Al Gough, Miles Millar, and Marti Noxon. 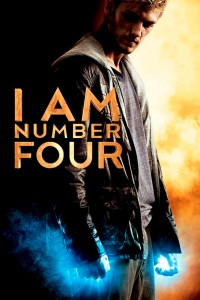 In I Am Number Four, John is an extraordinary teen, masking his true identity and passing as a typical high school student to elude a deadly enemy seeking to destroy him.

The film is being produced by Michael Bay and Steven Spielberg through DreamWorks; The Hollywood Reporter projected the budget to be between $50 and $60 million.

Nine infant aliens, who closely resemble humans, flee their home planet, Lorien, to hide on Earth. An invading species, the Mogadorians, have destroyed their planet, and followed them to Earth to hunt them down. Each of the nine aliens is given a guardian and will develop superhuman powers on becoming an adult. Each is assigned a number. These last children of Lorien can be killed only in the sequence of their numbers. Numbers One, Two, and Three have been killed so far.

Number Four (Alex Pettyfer), also named John Smith, moves to Paradise, Ohio, disguised as an American high school student. He makes a friend, Sarah Hart (Dianna Agron), a sweet Midwestern girl who is a photographer. After being on the run his whole life, Number Four falls in love and now has something to stand up and fight for. According to special inside previews, Number Four is conflicted between fighting along Number Six, or staying with a comfortable life with Sarah.

In March 2010, Alex Pettyfer was in talks to play the title character in the film, Number Four. It was later confirmed that the 20-year-old English actor will play the lead. Sharlto Copley was going to star as Henri, Number Four’s guardian and mentor, but had to drop out due to press obligations with his film The A-Team. Copley was replaced by Timothy Olyphant. Kevin Durand plays the villain of the film, Commander, an alien who leads the hunt of the escaped aliens on Earth.

DreamWorks went through multiple rounds of tests to find the right actress for the female romantic lead. Dianna Agron, a star in the Fox television series Glee, won the highly sought-after role. She plays Sarah, a girl who dates a high school football player, but falls for Number Four and keeps his secret. Jake Abel plays the football player, Mark James, an antagonist in the film who doesn’t like someone moving in on his girlfriend. Teresa Palmer plays another alien, Number Six, and 16-year-old Australian actor Callan McAuliffe plays Sam, Number Four’s best friend.

Film producer and director Michael Bay brought the manuscript of the teen book, I Am Number Four, to Stacey Snider and Steven Spielberg at DreamWorks. A bidding war developed for the film rights between DreamWorks and J.J. Abrams, with DreamWorks winning the rights in June 2009, with the intention of having Bay produce and possibly direct the project.  The rights were purchased with the hope of attracting teenage fans of the Twilight saga films, and the potential of establishing a film franchise, with at least six more installments planned by the book’s publisher.

James Frey is the co-author of the book, along with Jobie Hughes, a graduate of Columbia University’s creative writing program.  Al Gough and Miles Millar, the creators of the television series Smallville, were hired to write the screenplay in August 2009. Marti Noxon, writer and producer for the television series Buffy the Vampire Slayer, also contributed to the screenplay. D. J. Caruso was brought on to direct in early 2010, after Bay opted to focus on directing the third film of the Transformers series. Caruso had been selected by Spielberg to direct Disturbia and Eagle Eye for DreamWorks, and had success with both films. Caruso had less than a year to prepare, shoot and edit the film, due to a worldwide release date set for Presidents Day weekend.

Chris Bender, J.C. Spink and David Valdes are executive producing the film. Steven Spielberg contributed to the film’s characters, but is not expected to take a credit on the film. It will be the first DreamWorks film to be released by Disney’s Touchstone film label, as part of the new 30-picture distribution deal between DreamWorks and the Walt Disney Motion Pictures Group. The film is also the first release for DreamWorks after the studio’s financial restructuring in 2008.

Cinematographer Guillermo Navarro shot the film on 35 mm, using a format known as Super 1:85. Beaver, the former Conley Inn in Homewood, and nearby Buttermilk Falls were used as locations in the film; interior and exterior scenes were shot near a boat launch in Monaca. A spring fair scene was filmed in Deer Lakes Park in West Deer; Port Vue, North Park, New Kensington and Hyde Park were also used as locations. The setting of the film’s fictional town of Paradise, Ohio is Vandergrift, Pennsylvania, where filming took place from June to July 2010. Producers chose Vandergrift as the “hero town” of the film because of its unique look and curved streets, laid out by Frederick Law Olmsted, the designer of New York City’s Central Park.

Franklin Regional High School in Murrysville was chosen over 50 other schools in the area, due to its proximity to nearby woods, a part of the film’s plot, and its surrounding hills. The school was also selected for its one floor layout, wide hallways, and its football stadium in front. Teachers and recent graduates appear in the film, and a set that replicates the school was built in a studio in Monroeville for filming explosion scenes. In the last few weeks of production, scenes were filmed at the 200-year-old St. John’s Lutheran Stone Church in Lancaster Township. Additional filming took place in the Florida Keys.

I Am Number Four was  edited by Jim Page, with Industrial Light & Magic developing the visual effects for the alien creatures. It is director D. J. Caruso’s first extensive use of computer-enhanced special effects. The film was  scored by former Yes guitarist Trevor Rabin.