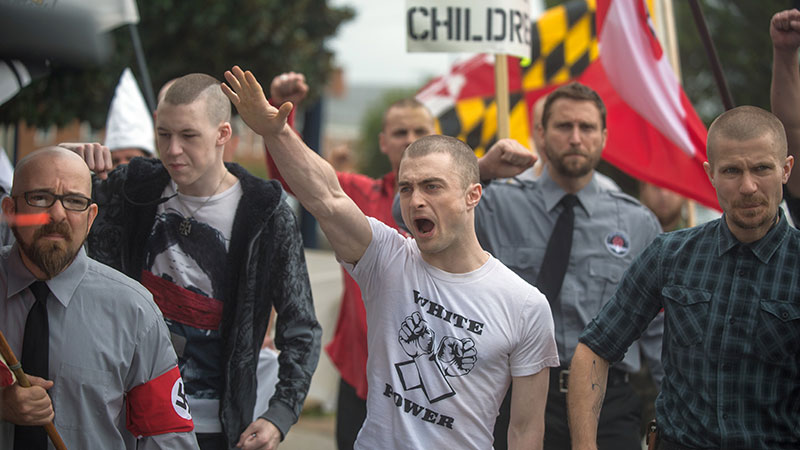 Nate Foster (Daniel Radcliffe), a young, idealistic FBI agent, goes undercover to take down a radical right-wing terrorist group. The bright up-and-coming analyst must confront the challenge of sticking to a new identity while maintaining his real principles as he navigates the dangerous underworld of white supremacy. 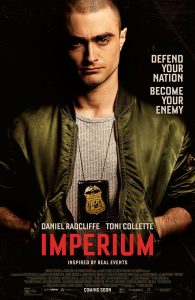 IMPERIUM co-writer Mike German has the kind of pedigree that commands respect: he served in the FBI for 16 years, 12 of them as an undercover agent tasked with infiltrating dangerous white supremacy groups in order to prevent domestic terrorist attacks. German successfully embedded himself with extremist groups on multiple occasions, leading to criminal convictions. German’s real life experiences infiltrating homegrown white supremacist terror cells intent on starting race wars, form the basis of the IMPERIUM screenplay.

IMPERIUM co-writer Mike German has the kind of pedigree that commands respect: he served in the FBI for 16 years, 12 of them as an undercover agent tasked with infiltrating dangerous white supremacy groups in order to prevent domestic terrorist attacks.  German successfully embedded himself with extremist groups on multiple occasions, leading to criminal convictions.

But initially, when IMPERIUM director/co-writer Daniel Ragussis first approached German about creating a film inspired by his work for the FBI, German expressed reluctance.  The ex-agent viewed Hollywood as too quick to turn undercover agents into nearly invincible, unbelievably superhuman movie heroes in the vein of Jason Bourne or James Bond. After many conversations, it became clear to German that Ragussis intended to create a film that accurately depicted the work of undercover FBI agents, one that eschewed sensationalistic Hollywood stereotypes regarding law enforcement and instead burrowed into the psychological tension of living day to day under the constant threat of exposure, yet staying alert enough to do investigative work.

Setting IMPERIUM in the present day was something German and Ragussis quickly agreed on, believing the film could better address important law enforcement and terrorism prevention issues that have dominated the national conversation.  Therefore, the film brings attention to the FBI’s seldom discussed racial-ethnic mapping program, in which American Muslims and other minority populations are controversially targeted.

In IMPERIUM, Radcliffe’s character needs to shave his hair in order to go undercover as a neo-Nazi skinhead.  Radcliffe was therefore required to put razor to scalp for the first time on camera, a scary proposition for the actor.  Speaking to Jimmy Fallon on “The Tonight Show,” Radcliffe revealed, “I was quite relieved because I shaved it on camera for the film and I’ve never shaved my head before.  So I don’t know what’s under there.  There might be a lump or a birthmark or something unexpected.  But it all turned out fine, which I was relieved by.”

Long a favorite for location scouts working on period pieces, Hopewell, Virginia and the surrounding area have routinely provided a distinctive visual backdrop of history for narratives driven by stories from the past.  IMPERIUM is one of the first contemporary films to be shot in the versatile shooting location.

Set in the Virginia/Washington DC of the present day, IMPERIUM required a location in the region that could accommodate all of the diverse settings called for in the script.  Working closely with the Virginia Film Office, the film team soon selected the small city of Hopewell as the ideal place to set up shop.  With its mixture of industrial, residential, and commercial locations, as well as its close proximity to the more metropolitan Richmond, Hopewell proved a natural fit for IMPERIUM production.

In addition to welcoming the cast and crew with open arms, many residents of Hopewell and the surrounding areas also served as extras in the film.  In fact, some of the film’s key scenes, including a pivotal riot sequence filmed in downtown Hopewell and a neo-Nazi wedding scene, featured several hundred local extras.  The wedding scene was filmed at the historic Brandon Plantation in Prince George County, the largest former plantation in Virginia.

Although the majority of IMPERIUM was shot in Hopewell, several scenes were also filmed in Virginia’s capital city of Richmond.  With its larger, more urban environment and historic buildings, including Old City Hall and the Virginia State Capitol building, Richmond provided an ideal location to shoot the film’s scenes set in Washington, DC, including the exciting action sequence that opens the film.