Yeshua (the Hebrew pronunciation of Jesus) has been wandering the desert, fasting and praying, but he has not always been alone—the Devil has occasionally shown up to taunt him, appearing to Yeshua in his own guise. Now, in the last days of his trek, the holy man encounters a family: a 16-­year-­old boy, his 60-­something father and his dying mother, who is in her 30s. 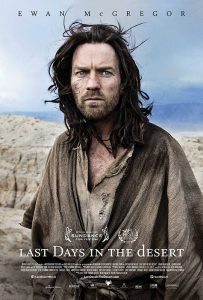 On location during the five-week shoot, García’s key ally proved to be director of photography Emmanuel Lubezki. The Mexican cinematographer, nicknamed “Chivo,” earned Academy Awards for Birdman and Gravity, Because of Last Days in the Desert’s modest budget, Lubezki suggested using natural light whenever possible.

Last Days in the Desert marks a radical shift from director Rodrigo García’s previous projects, including Mother and Child, Nine Lives and the HBO series “In Treatment.” “Most of the movies I have written are about middle-­‐‑class women and their problems, so this film is decidedly a departure for me,” he says. Though García had never set a story in ancient times, the fictional encounter between Jesus and a family in crisis popped into his head as a fully-­‐‑ formed premise. “I grew up in a Catholic world and, of course, I’m familiar with the story of Jesus,” he says.

As García fleshed out the family dynamics at the heart of the film, he decided to raise the stakes by adding one additional character: the Devil. García says. “I chose to make the Devil appear to Jesus in his own guise, and he questions his ability and makes a wager with him—to solve the problem of this family to everyone’s satisfaction. That’s when I knew I had enough elements to start writing a script.”

When García completed the screenplay, he brought the project to Julie Lynn and Bonnie Curtis at Mockingbird Pictures. The tale of financing almost becomes one of manna in the wilderness. Mockingbird—which also produced García’s earlier movies attracted backers from its own equity pool, as well as Division Films’ Wicks Walker (Spring Breakers), who found his way to the project after meeting McGregor at a charity event. Walker immediately responded to the metaphorical power of García’s script, noting that rather than attempting to offer a factual account of Jesus in the wilderness, Last Days in the Desert dramatizes timeless human themes through an imagined moment in the man’s life.

Once García had the production team in place, he began looking at actors in their early 30s to portray Yeshua (the Hebrew pronunciation of “Jesus” and the name by which he is called in the film). “I wanted someone in that age group, because Jesus would have been around 30 at the time of this story,” García says. But Mockingbird producers Lynn and Curtis persuaded the filmmaker to send his screenplay to Scottish actor Ewan McGregor.

McGregor responded immediately to the simplicity of García’s spare, 62-­page script. “Ewan called me up and said, ‘I read it, I like it, let’s do it,’” García recalls. “That was one of those phone calls where the fate of a project turns from ‘Most Likely Will Never Be Made…’ to ‘Very Likely Will…’”

Preparing to approximate the physical condition of a man who’s been fasting for nearly six weeks in the desert, McGregor lost considerable weight before filming began. A bigger challenge, however, was figuring out the interior life of one of the world’s most influential historical and religious figures. McGregor decided to focus on the character’s immediate predicament. “I realized I really just had to play this guy that Rodrigo named Yeshua, who’s walking in the desert for 40 days and nights, trying to reconcile the mission his Father has for him.”

After casting McGregor, García assembled an international ensemble of A-­list character actors to portray the conflicted family members the holy man encounters on his way out of the desert. In the pivotal role of the couple’s discontented son, García recruited fast-­rising American actor Tye Sheridan. The Texas teenager first caught the director’s eye with his quiet performance in Terrence Malick’s Tree of Life. Getting into costume helped the young actor immerse himself in the story’s setting. “I wasn’t quite able to really figure out who this guy was until I had the long hair extensions, the turban, the tunic and all the dirt,” Tye recalls.

For the character of the ailing mother, García picked Israeli actress Ayelet Zurer, who starred in the original Israeli TV series Be Tipul. “The mother is a very interesting role, because it’s the portrait of a woman on her death bed, whose only wish is to make sure her son is not stuck behind,” comments Zurer. “It was personal for me, because I experienced somebody dying about a year before we started on this film.”

Irish actor Ciarán Hinds plays the boy’s father. García reached out to Hinds after watching his performances in Munich and Tinker Tailor Soldier Spy. “There’s something about Ciarán that’s masculine and rough in an interesting, sensitive way,” García explains.

One day while surfing the internet in search of locations, García discovered a website for the Anza-Borrego Desert State Park, which is located a couple of hours east of San Diego, California. Over the course of six weeks, García and first assistant director John McKeown took car trips to the region, where they scoped out the rugged terrain. “We combed a great deal of the park and particularly liked this long ridge called Font’s Point, where we wound up building the tent,” García explains.