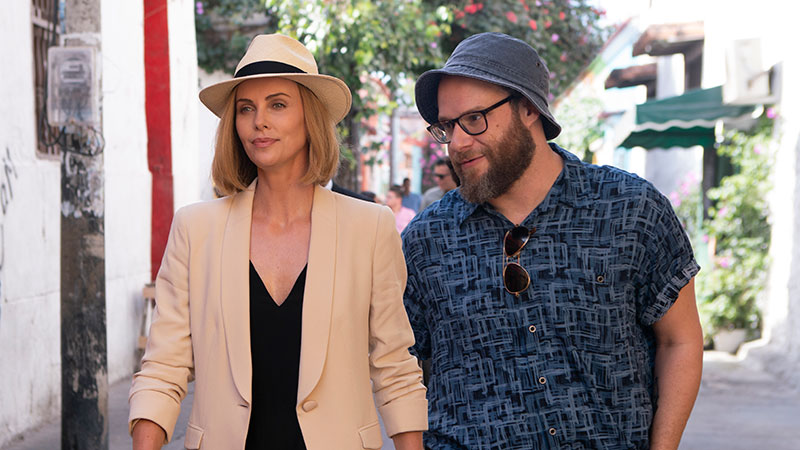 When Fred Flarsky (Seth Rogen) reunites with his first crush, one of the most influential women in the world, Charlotte Field (Charlize Theron), he charms her with his self-deprecating humor and his memories of her youthful idealism. As she prepares to make a run for the Presidency, Charlotte hires Fred as her speechwriter and sparks fly. 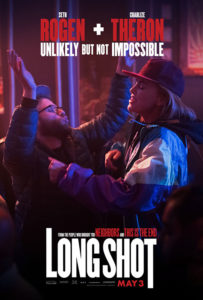 Music also plays a role in bringing Fred and Charlotte together, with their mutual nostalgia for the 90s R&B hitmakers Boyz II Men drawing them closer. The filmmakers were absolutely thrilled to be able to bring the current incarnation of the record-breaking band into the film.

Years before he first teamed with Seth Rogen and producer Evan Goldberg on The Interview, screenwriter Dan Sterling set out to see if he could enchant a character who had become entirely disenchanted. Then, Sterling was a writer on the irreverently topical The Daily Show. He started thinking about a guy who, not unlike himself at that time, had become cynical about everything from politics to love, because none of it seemed to be working very well. What if such a guy fell in love with a woman so full of vigor, power and light, he had to adjust his own view of the world just to have the most remote shot with her?

Thus was born Fred Flarsky, an unapologetically opinionated, gonzo-style journalist still trying to make his mark in an age of corporate media. “I saw Flarsky as a guy who is creeping up on middle age, whose career as a journalist is on the verge of dying and he’s adrift in a lot of ways,” Sterling describes. “And then I asked myself: who would be the most unforgettable, most powerful woman Fred Flarsky could possibly pursue?”

That in turn led to the creation of Charlotte Field, the flame Fred’s been unable to put out since boyhood: his utterly unattainable babysitter, who from the second he met her inspired him…and seemed light years out of reach. Unsurprisingly to Flarsky, the wondrous Charlotte went on to become one of the most impressive and influential women in the world, while he’s been muckraking for the local Brooklyn Advocate.

Point Grey Pictures made its debut with the critically acclaimed 50/50 and went on to bring such hits as the Neighbors series, The Interview, Sausage Party and Blockers to the screen. But the company had never made anything with the scale, polish and mix of comedy and romanace that Long Shot would demand. The idea of stretching their comedy into the global sphere presented an exhilarating challenge. “We haven’t ever gone into this world before and that felt really exciting,” says Goldberg. “It just seemed really fun that in the middle of international negotiations you suddenly have a classic odd couple thing going on.”

Then the team went in search of director who could blend Rogen and Theron, politics and pratfalls, awkward relationships and savvy foreign relations with warm yet unbridled humor. Point Grey couldn’t help but think of Jonathan Levine, who had directed 50/50 for them. “50/50 had to balance emotion and humor and that’s exactly what we needed for Long Shot,” says Rogen. “Even though Long Shot couldn’t be set in a more different world, the fact that we knew Jon can mix weight and lightness, which is so hard to do, was really important. He also made Warm Bodies, a movie where a girl falls in love with a zombie and it worked, which is crazy. So he just seemed like the perfect guy to do this.”

Surrounding Fred and Charlotte is a cast of comical characters from their disparate worlds. They include Fred’s life-long best friend Lance, who has never let him down; no matter his misadventures. From the minute Fred re-encounters Charlotte, Lance is there, convincing him he’s good enough to pursue the impossible. Taking the role is O’Shea Jackson Jr., an actor and rapper (under the stage name OMG) best known for playing his real-life father, Ice Cube, in Straight Outta Compton.

Jackson especially enjoyed having the chance to bounce off Rogen’s comic instincts and says the entire ensemble is what made the film such an unusual experience. “You had everybody adding their own special spices to the soup, which is what makes it a dish,” he sums up. “We all had so much fun with each other and I think that comes through in the feel of the movie.”

Behind Charlotte stands a loyal staff, and no one is more devoted to her than her rabidly meticulous Chief of Staff, Maggie, whose job is to solve every problem long before one arises. Naturally, Maggie’s consummate skills sniff out Fred Flarsky as an issue from the second Charlotte decides to hire him. Taking the role is Grace and Frankie star June Diane Raphael.

Theron adored both Maggie and Raphael’s portrayal. “I really like the way the script captures the real work dynamic between two women in powerful positions who each want the other to only have the best,” she says. “Junie is so incredibly funny but she always comes from this place of heart and she was always there for me.”

LONG SHOT is the rare modern comedy that jets around the world’s hot spots, moving from New York and Washington D.C. to France, Sweden, Argentina, Japan and the Philippines … and from formal dinners of state to explosive coup d’états. The creative challenges of a comedy with so many locations and moving parts only made it more exciting for the filmmakers. “The story has scope and scale that’s not only a lot of fun for a comedy but also separates it from other movies we’ve done,” notes Weaver.

To bring it all to life, and let the comedy roll in such sophisticated settings, Levine worked with a versatile crew led by director of photography Yves Bélanger, who has shot such acclaimed dramas as Dallas Buyer’s Club and Brooklyn, as well as the award-winning TV series Big Little Lies and Sharp Objects; production designer Kalina Ivanov, whose work includes Wonder and the Oscar®-winning Little Miss Sunshine; and costume designer Mary Vogt, who recently designed Crazy Rich Asians.