Mankatha (Tamil: மங்காத்தா) is a Indian Tamil action, comedy and thriller film written and directed by Venkat Prabhu. It will star Ajith Kumar in the lead role, making it his 50th film, along with Nagarjuna, Manoj Manchu, Ganesh Venkatraman and Premji Amaren. The film, to be produced and distributed by Dhayanidhi Alagiri’s Cloud Nine Movies, was formally launched in August 2010 and is expected to release the following year. 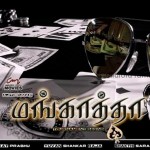 Following the release of his film Aasal in February 2010, Ajith Kumar was signed by Dhayanidhi Alagiri’s Cloud Nine Movies for a project touted to be directed by Gautham Menon. However, as Ajith Kumar participated in the 2010 season of the FIA Formula Two Championship, Gautham Menon, unwilling to wait, decided to shelve the film and opted to focus on another project, which prompted Venkat Prabhu, who was keen on making a multi-starrer film featuring top stars, to sign the actor in his next film, after the director saw moderate success with his previous film, Goa. The film officially commenced on 2 August 2010 with the formal launch and a simple pooja at the AVM Studios, Chennai, coinciding with Ajith Kumar’s 18th anniversary of his entry into the film industry. The film’s title, initially being Mangaatha, derived from a popular Indian traditional card game, also underwent a minor change in its spelling, due to numerological reasons. A short teaser trailer was also shot on the first day and was screened during the intermission of Naan Mahaan Alla, another Cloud Nine Movies distribution that released on 20 August 2010.

The film is supposed to be a “multi-starrer”, with many leading South Indian actors expected to appear in this film, which is a rare occurrence and would be the first of its kind in the Tamil film industry. Telugu actor Nagarjuna and Ganesh Venkatraman were approached to essay other lead roles alongside Ajith Kumar, with the former being confirmed by the director during the launch of the film. Manoj Manchu and Premji Amaren were also considered for roles in the film, with Premji also being confirmed to be part of the cast, while a newcomer named Mahat would play an important role as well. Later that month, Venkat Prabhu affirmed that both Venkatraman and Manoj have been roped in as well. For the lead female role, Samantha Ruth Prabhu, Anushka Shetty, and Neetu Chandra were approached, along with Lakshmi Rai for a second female lead role.

As with Venkat Prabhu’s previous directorials, Yuvan Shankar Raja will score the background score and soundtrack for Mankatha, Sakthi Saravanan would handle the cinematography and K. L. Praveen would take care of the editing.