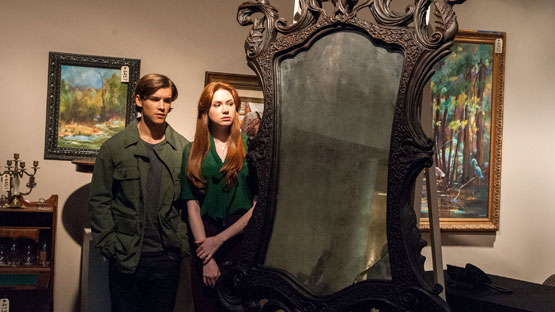 Co-writer/director Mike Flanagan’s Oculus introduces audiences to a new kind of terror: the eerily inscrutable Lasser Glass. This beautiful antique mirror is no ordinary villain. Though the mirror’s true origins have been lost with its victims, it carries the name of its first recorded owner, Philip Lasser. Its seemingly harmless reflections hold a malevolent supernatural force that infects the mind of the viewer, leading to paranoia, distorted visions, and eventually, possession. 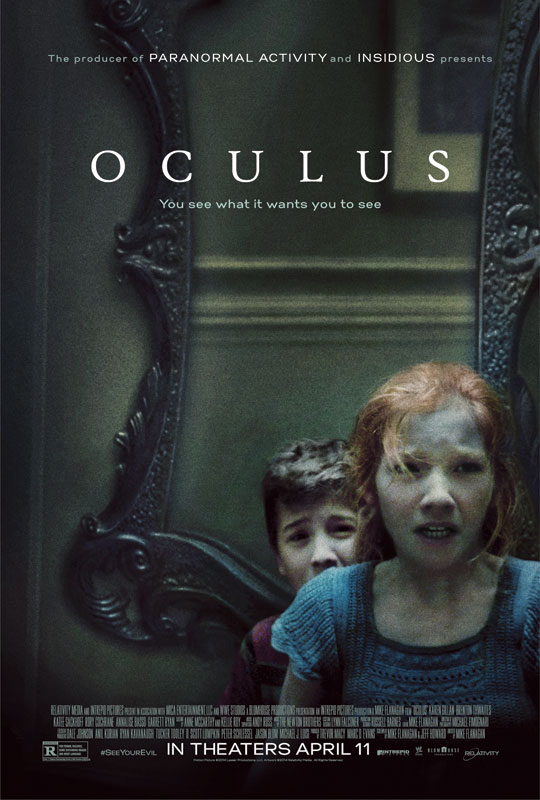 Flanagan’s journey bringing Oculus to the screen began with a short film of the same name he wrote and directed in 2005. That film, which was made for just under $1,500 and shot in four days, featured one actor alone in a room with the Lasser glass for the entirety of its thirty-minute running time.

With a complex and psychological story that takes place in the past and present – often simultaneously – there were a few production challenges that the crew had to work around.  “Our location had this kind of catwalk style upstairs hallway where all this action had to take place. It was incredibly tight,” says Flanagan. Shooting a film with a mirror also presented challenges as the crew had to ensure they were always out of its reflection. “We always had to contend with the fact that this mirror was going to reflect back at us everything we didn’t want to see.”

When Intrepid Pictures’ Vice President of Development, Anil Kurian, watched Absentia, he immediately recognized a talent in the making.  Kurian called in Flanagan for a meeting and was immediately taken by his treatment for the feature-length version of Oculus.

With a modest budget in place, the filmmaking team turned to casting the four leads.  From the very start of the writing process, Flanagan had actress Karen Gillan, known for her work on the television series, “Dr. Who,” in mind for the part of Kaylie.  “Kaylie is this ambitious, driven, obsessed character – you need to question her sanity a little bit – and Karen has that intensity,” says Flanagan.  “I’m also a huge ‘Dr. Who’ fan.”

Australian actor Brenton Thwaites landed the role of adult Tim Russell.  “Tim is the audience’s way into this story,” says Flanagan.  “And finding an actor who had that youth but also this sense of someone who had been through intense darkness was a real challenge.” For his part, Thwaites appreciated the script’s focus on character psychology over cheap scares.

For the roles of Marie and Alan Russell, the parents of Tim and Kaylie who appear in the film’s flashbacks, the filmmakers turned to “Battlestar Galactica” star Katee Sackhoff and film/television veteran Rory Cochrane.

Casting the young Kaylie and Tim roles – 13 and 11 years old respectively in the script – meant finding young actors who were capable of handling the emotional intensity of the story.  Producer Trevor Macy recalls being impressed by young star Annalise Basso when he first saw her audition tape.

The Intrepid Pictures partners brought in Alabama-based executive producer D. Scott Lumpkin to oversee production, which took place over a four-week period on several locations in Mobile, and around the Eastern Shore area of Alabama in October, 2012. After seeing the work of cinematographer Michael Fimognari, the producers enlisted him to capture the film’s increasingly unnerving atmosphere.

Since the mirror has an immense history that spans various centuries, the team brought on costume designer, Lynn Falconer, who dressed each of the victims in appropriate period dress, beginning in the 1700s and running through the centuries to modern times.  Lynn says that in order to get their costumes accurate, she “found things that felt like the characters as they were described in the long monologue by the lead character about a railroad tycoon, for instance, in 1865.”