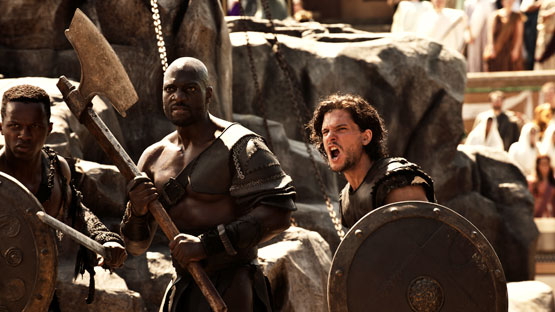 Romance, adventure and a natural disaster of cataclysmic proportions collide headlong in Pompeii, director Paul W. S. Anderson’s epic recreation of one of the ancient world’s most compelling tragedies.  Set in 79 A.D., Pompeii tells the heroic story of Milo, a slave turned invincible gladiator who finds himself in a race against time to save his true love, Cassia, the beautiful daughter of a wealthy merchant who has been unwillingly betrothed to a corrupt Roman Senator.  The film stars Kit Harington, Carrie-Anne Moss, Emily Browning, Adewale Akinnuoye-Agbaje, Jessica Lucas, with Jared Harris, and Kiefer Sutherland. 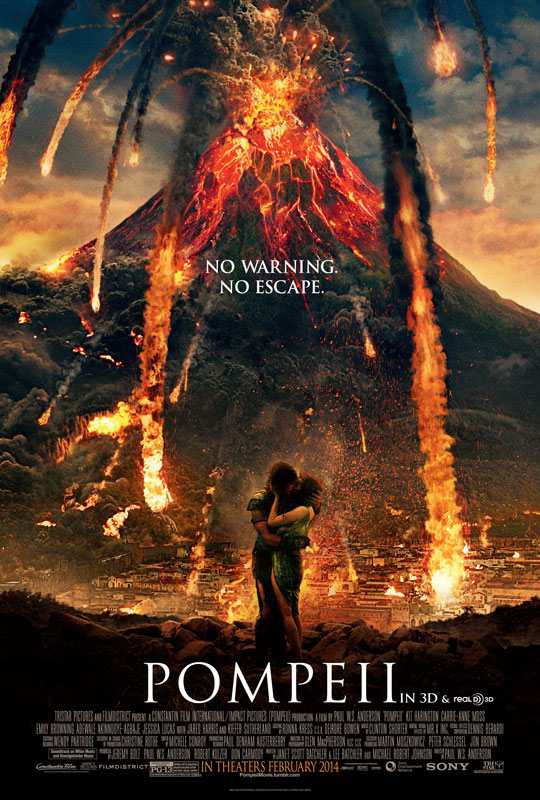 Before they began principal photography at Toronto’s Cinespace Studio, the filmmakers began by constructing an astonishing glimpse of Pompeii in 79 A.D. through fastidiously researched production design, wardrobe and visual effects.

A Constantin Film and Impact Pictures (Pompeii) production, the film is directed by Paul W.S. Anderson from a screenplay by Janet Scott Batchler & Lee Batchler; and Michael Robert Johnson.

Anderson and his longtime producing partner Jeremy Bolt, best known for their evocative explorations of a bleak future world in the Resident Evil series, spent over six years researching and developing Pompeii.  They have created a meticulously detailed portrait of a lost world, as well as an iconic adventure that harks back to the age of the classic disaster films.

Filling the film’s leading role, Milo, posed multiple challenges, especially since the character is both the film’s romantic leading man as well as a ruthless professional warrior. Kit Harington, familiar to audiences as the dark and brooding Jon Snow on the popular series “Game of Thrones,” was selected to play the fiery Celtic gladiator. “We wanted somebody fresh and exciting who would take the audience by surprise,” says Bolt. The historical aspect of the film held great appeal to Harrington as well. “I’ve done lots of period movies and I genuinely enjoy them,” he says.

To play the young noblewoman, the filmmakers selected Australian actress Emily Browning. “Cassia is a very complicated character and the success of the movie depends on her,” says Anderson. “Emily did a terrific job,” says Bolt.

To play Corvus, the filmmakers turned to Golden Globe® and Emmy Award® winner Kiefer Sutherland. “I thought it would be interesting to take a familiar actor, known for playing a hero, and flip that by having him play the bad guy,” says Bolt.

Some of the most memorable scenes in Pompeii are set in the brutal and bloody world of the gladiators. Four weeks before principal photography started, the actors began training so that they would not only look like hardened professional athletes, but would also be able to endure fighting on camera for 12 hours a day. Physical trainer Nuno de Salles was recruited to whip the cast into shape.

Producer Jeremy Bolt explains that CG effects were kept to a minimum to ensure that quality. “Unless you have some reality in every scene, you can’t sell the reality of the film. The more you shoot in camera, the more likely the audience will believe it. The style of this film is very realistic. It’s not science fiction; it’s not a comic book or a graphic novel. It really happened. We agreed there would be no gimmicks or fancy camera work that would take you out of the film.”

Production designer Paul Denham Austerberry and his team built close to 30 sets for the film, including Severus’ opulent villa, the Pompeii streets, the amphitheater and the forum where some of the film’s most vicious battles play out.