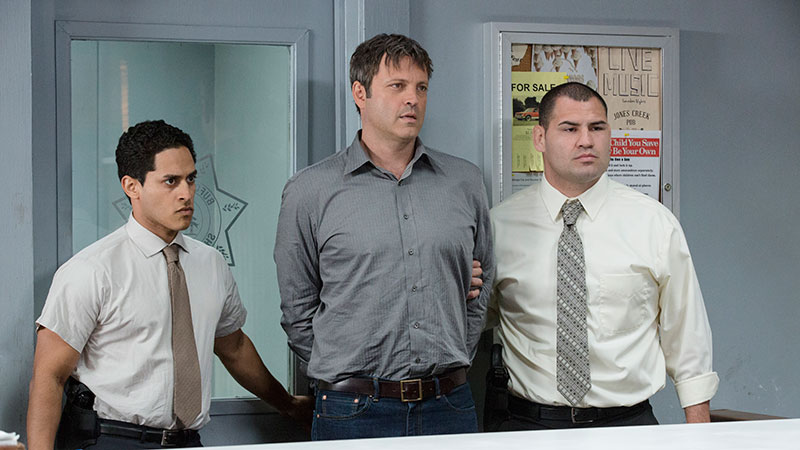 Nick Barrow (Vince Vaughn) plans and sells heists to the highest bidder. But when his latest job goes horribly wrong and the son of a major drug cartel leader (William Levy) is assassinated, he finds himself being hunted by the head of the cartel, Viktor Vasquez (Jordi Molla). 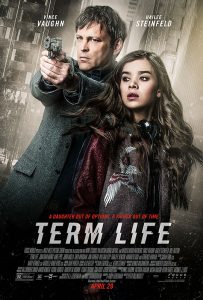 Term Life is the second time that Peter Billingsley steps behind the camera to direct.

It was Producer Micah Mason who first discovered the graphic novel, Term Life, written by AJ Lieberman and Nick Thornborrow.  He admits, “I read a lot of comic books and pick up graphic novels when they look interesting. I knew of Andy’s prior work.  He did a piece called Cowboy Ninja Viking, which I enjoyed, so when I saw his name on this Term Life, I was interested.”

Producer Victoria Vaughn allows, “We decided to option the book with the intention for Peter to direct and Vince to star. So, it was developed internally from the start at Wild West by Micah and Peter.”

Director Peter Billingsley remembers, “Micah is a big fan of graphic novels and when he brought in Term Life, we all responded immediately. It was a crime story that had a lot of twists and turns with great characters and it had a great A-story plot.”

Transforming the graphic novel and into a screenplay was the next step. Producer Victoria Vaughn reveals, “In meeting Andy (AJ Lieberman) when we were discussing optioning the book, he said that he would like to write the first draft. As we talked about how we wanted to make the graphic novel into a screenplay, we found creatively we were in sync.”

The graphic novel is told in non-linear format; the movie is not.  Producer Micah Mason explains, “The idea to change it from a flash-forward story telling structure that Andy had in the original graphic novel to a more traditional linear storytelling line came from Andy himself. ”

The core of the story revolves around this teenager, ‘Cate,’ who finds herself suddenly with her estranged father, ‘Nick,’ whom she thought was dead. Landing the right actress for this part was key. Everyone agreed that Hailee Steinfeld would be the perfect young actress to star opposite Vince Vaughn in the crucial role of ‘Cate.’

Hailee Steinfeld finally met with the filmmakers of Wild West Picture Show Productions in the late summer of 2013. Hailee Steinfeld remembers, “When I met with Peter Billingsley and Victoria, they just had so much excitement and enthusiasm behind everything that they had in mind for this project.” She smiles, “I went back a couple of days later to meet Vince, and that pretty much sealed the deal.”

Next up was finding the right antagonist. Victoria Vaughn offers, “Bill Paxton was our ‘out-of-the-box’ choice. Peter really pursued him for the role of ‘Keenan.’  He felt that audiences wouldn’t see him coming, and knew that he could do an amazing job in the film.”

Bill Paxton, whose body of work has spanned over thirty years, including last year’s 2 Guns, offers, “When I was contacted by Peter Billingsley and Victoria Vaughn through my agent, I was told they were putting together this vehicle for Vince Vaughn & Hailee Steinfeld, two actors I really like.”

Producer Micah Mason reveals, “Initially, the graphic novel took place in New York with the Russian Mafia, which made sense for New York.  But when we moved filming to Atlanta, we changed the story to Atlanta so we wouldn’t miss an opportunity to really open the lens and see some of the wide panoramas of the city we are in and really live in it.”

He continues, “We changed the Russian mob to the Mexican mafia, but we didn’t change the characters. We changed some of the forces that they were aligned with but all the characters were already there.  We just sort of fleshed them out in a way that made sense in the world around Atlanta which was why we were really lucky in finding Jordi Molla and William Levy to play those roles for the Mexican cartel.”

Director Peter Billingsley allows, “Atlanta is a very diverse and rich cultural city.  There’s a lot of history in this city, a lot of texture in the buildings, to a lot of the locations and to so many people that are in it.  We really wanted a dynamic, interesting, culturally diverse city and Atlanta really offers that with a lot of history.”