A mysterious plague has fallen upon 19th century England. The land is overrun with the undead, upending genteel Victorian mores and turning the bucolic English countryside into a war zone. No one is safe and friends can instantly turn into ravenous and wild foes. Enter feisty heroine Elizabeth Bennet, a master of martial arts and weaponry, independent, clear-eyed and strong-willed. 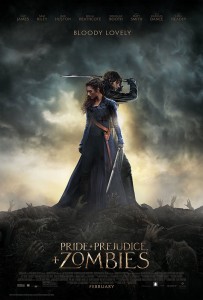 For Sam Riley, training for the physical rigours of the role was a big challenge.

The book soon picked up strong reviews and became a publishing sensation, finding a comfortable spot on the New York Times bestseller list where it would remain for several months. Finally, Shearmur picked up a copy. “Natalie was absolutely right about it,” Shearmur now admits. “Seth Grahame-Smith is a very clever man, and he knew the source material back to front.”

Producer Sean McKittrick was already aboard the production when Shearmur circled back around. “The book came to me by email, four or five months before publication,” he recalls. “And I saw the cover and I immediately got it. It’s a perfect extension of the Austen story, and the zombies become a physical element that amplifies the themes of the original text.”

Shearmur ran into Burr Steers in Los Angeles one morning and the director of Igby Goes Down told her that she had a project he was interested in. “I was wracking my brain, knowing the kinds of movies Burr makes, and thinking, ‘Which script is Burr interested in?’ He cut me off and said, ‘Pride and Prejudice and Zombies.” “He said, ‘I know exactly how to do it,’” Shearmur remembers. “And when a person with that level of talent says to you that they know how to do something that could be quite tonally difficult, I had to listen.”

Producer, Marc Butan took the film out of turnaround from Lions Gate and made the final decision to hire Steers over half a dozen others.

With Shearmur, Butan oversaw the development of the script, packaged it and took it to Cannes to put the movie together. He then sold the US rights to Cross Creek Pictures producer, Brian Oliver, who was previously a producer on the Academy Award® nominated Black Swan. Oliver came on board because he was attracted to Steers’ vision of the book, which he had read many years before.

Independent of this project, Steers had done his own zombie research and coupled with his affection for the Austen source material and Grahame-Smith’s novel, he had a singular and informed vision of how to approach the movie. He had been working on a movie that took place in Haiti and had extensively studied such things as the Tonton Macoutes, a mythical Creole bogeyman who kidnapped children and later corrupt dictator Francois “Papa Doc” Duvalier’s fearsome paramilitary force took the same name and some of the same tactics “… to freak out the natives during the Haitian genocide. I also looked at Baron Samedi/Saturday, the relation to European lore. So I was aware there could be a different take on it and as Seth proved, ‘Jane Austen’ was a perfect template.”

Shearmur recalls reading Steers’ first draft of the screenplay. “You could tell a director was writing,” she remembers. “It was very specific in terms of shots, and it’s tonally perfect. ”

Lily James plays the lead role of Elizabeth Bennet, one of literature’s best-known and best-loved heroines. James already had experience as a forward-thinking young lady cast in a period drama, as the feisty Lady Rose MacClare Aldridge on Downton Abbey. James read the screenplay and fell for it after just seven pages. “It was so well written, and Burr has done a great job with it,” she notes.

Her great love and foil, Mr. Darcy is played by Sam Riley, who recently played Diaval in Maleficent and so certainly knew a thing or two about playing opposite powerful, complicated female characters. “I’d wanted to work with Sam Riley for years,” notes Steers, simply. “Ever since I saw Control, I’ve tried to get projects going with him. If you’re going to have to do some work to dispel the ghosts of previous Mr. Darcys, he was the guy to do it.” Riley’s inspiration for his Darcy was exactly what Steers wanted. “He said, ‘I’m going to play it like a punk James Bond,’” laughs the director. “And he really did approach it that way.”

Bella Heathcote went back to the book when she was cast as Jane Bennet, but put it down in favor of the screenplay. “There’s a point in our story where there’s a big digression obviously, but Jane is one and the same with the character in Austen’s book; the circumstance of her world is slightly different and certainly more lethal,” she explains.

Designing studio sets and dressing the locations was the job of the film’s art department, led by production designer Dave Warren. “99% of the film is on location,” notes Warren. “Burr and Remi had been looking at English cinema of the 1970s, and in a way they quite liked the constraints of films shot on location. You see it on screen – the camera might be constricted sometimes, but the windows are right and everything’s real and the sunshine is beating down. I think they both quite liked that.”