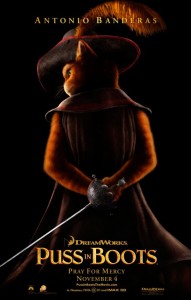 Way before he ever met Shrek, the legendary Puss In Boots goes on a heroic journey, teaming up with mastermind Humpty Dumpty and the street-savvy Kitty Softpaws to steal the famed Goose that lays the Golden Eggs.

The film is based on and follows the character of Puss in Boots from Shrek and his adventures before his first appearance in 2004’s Shrek 2. The prequel’s story centers on the swashbuckling cat and how he comes to meet Shrek and his friends, while introducing new characters as well.

The film has been in development since 2004, when Shrek 2 was released. As a Shrek 2 spin-off, it was originally planned for release in 2008 as a direct-to-video film, but this was changed in 2006 in favor of a theatrical release. Production on the film began after the release of 2010’s Shrek Forever After.

Banderas said in an interview in early 2010 that he had completed the first recordings of his character. The film is scheduled to be released as a 3-D film. Late in 2010, Guillermo del Toro, director of Hellboy and Pan’s Labyrinth, had signed on as executive producer.

Except for Puss, the film will feature all new characters. Citing the co-writer, David H. Steinberg, “It doesn’t overlap with Shrek at all. Partly that was done to tell an original Puss story, but partly because we didn’t know what Shrek Forever After was going to do with the characters and we couldn’t write conflicting storylines.” The film was teased in Shrek Forever After when Shrek finally put the book of Shrek away and put it next to a book titled “Puss in Boots”.