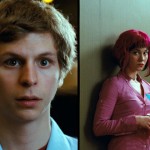 A video game was produced based on the series, it was released on August 10, 2010 on PlayStation Network, with a release on Xbox Live Arcade on August 25. The game is developed by Ubisoft Montreal and Ubisoft Chengdu

Scott Pilgrim vs. the World was planned as a film after the first volume of the comic was released. Director Wright became attached to the program and began filming in March 2009 in Toronto, Ontario. Scott Pilgrim vs. the World premiered after a panel discussion at the San Diego Comic-Con International on July 22, 2010. It received a wide-release in North America on August 13, 2010.

The story begins in Toronto where Scott Pilgrim (Michael Cera), the bass guitarist for the band “Sex Bob-Omb”, begins dating high-schooler Knives Chau (Ellen Wong) despite the protests of his friends and bandmates. He later meets a mysterious American girl named Ramona Flowers (Mary Elizabeth Winstead) and falls in love with her, losing interest in Knives.

Sex Bob-Omb competes in a battle of the bands to win a record contract with the label G-Man when Scott is attacked by Matthew Patel (Satya Bhabha), who introduces himself as the first of Ramona’s evil exes. Scott defeats Matthew and learns from Ramona that, in order for them to date, he must first defeat all seven of her evil exes, who have joined forces to destroy Scott and control Ramona’s love life.

After artist Bryan Lee O’Malley completed the first volume of Scott Pilgrim, his publisher Oni Press contacted producer Marc Platt with the proposition for a film version. Universal Studios contracted Edgar Wright who had just finished his last film, Shaun of the Dead, to adapt the Scott Pilgrim comics.

O’Malley originally had mixed feelings about a film adaptation, stating that he “expected them to turn it into a full-on action comedy with some actor that I hated…I didn’t even care. I was a starving artist, and I was like, ‘Please, just give me some money.'”