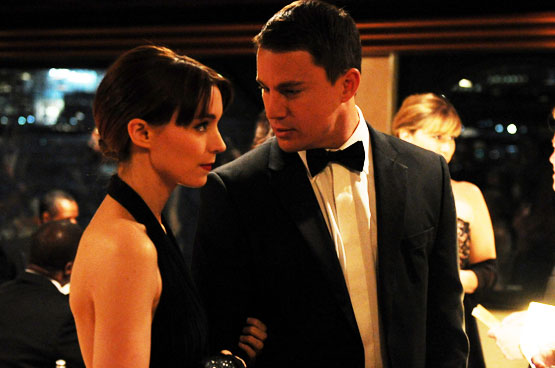 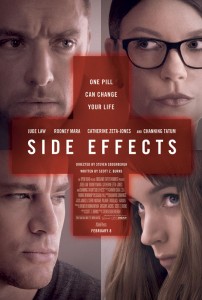 Side Effects is one of actress Rooney Mara’s first roles since her Oscar-nominated turn in The Girl with the Dragon Tattoo catapulted her onto the Hollywood A-list. But Soderbergh first became aware of Mara when he saw an early cut of her previous film, The Social Network, directed by David Fincher.

Emily (Academy Award nominee Rooney Mara) and Martin Taylor (Channing Tatum) are a young, beautiful, wealthy couple living the good life, with a mansion, a sailboat and every luxury money can buy—until Martin is sent to prison for insider trading. For four years, Emily waits for him in a tiny apartment in upper Manhattan, but his release is just as devastating as his incarceration and Emily sinks into a deep depression.

Over a decade ago screenwriter Scott Z. Burns spent several weeks doing research at New York’s famed Bellevue Hospital psychiatric facility. Burns, who was then writing for the acclaimed television medical drama Wonderland, spoke with the psychiatrists on staff and watched them at work with mentally ill patients, including many who had a criminal past.

Burns began to develop the script that would eventually become Side Effects with the help of Dr. Sasha Bardey, who was at the time Deputy Director of Forensic Psychiatry for Bellevue Hospital. “Sasha and I met working on ‘Wonderland,’” says Burns. “His input was essential because this movie needed to be firmly rooted in reality.”

Side Effects was shot primarily on location in and around New York City, which Soderbergh says can be a bit intimidating. Fortunately, the characters go to some impressive New York landmarks including the legendary restaurant Le Cirque, the Waldorf-Astoria and Intercontinental Hotels, the conservatory  pond in Central Park, the Frank E. Campbell Funeral Home on the Upper East Side and the  exclusive residential enclave of Centre Island.