Sin City: A Dame to Kill For is an American crime thriller film and sequel to the 2005 film Sin City. Co-directed by Robert Rodriguez and Frank Miller, the script is co-written by Rodriguez, Miller, and William Monahan and is primarily based on the second book in the Sin City series by Miller. 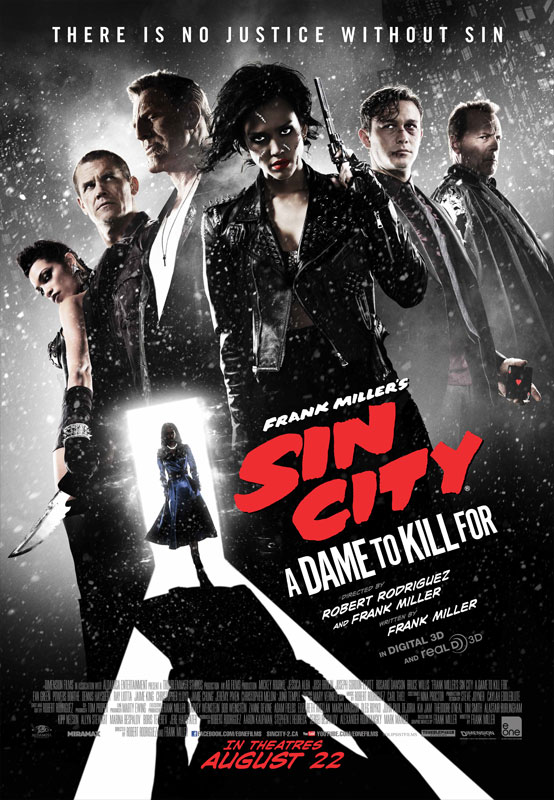 In May 2014, Motion Picture Association of America banned a poster of the film featuring Eva Green due to nudity visible through sheer gown.

Production on the film has been delayed, mostly due to Rodriguez’s involvement with a scheduled remake of Barbarella. The film was expected to go into production in the summer of 2012, but principal photography began near the end of October 2012. On June 17, 2013, the film’s release date was pushed back from October 4, 2013, until August 22, 2014.

In 2005, after Sin City was released, Rodriguez announced plans for a follow-up film that would feature many of the same characters. He planned for the film to be based on A Dame to Kill For.

Miller said the film would be a prequel and a sequel with interlinking stories both before and after the first film. Miller, who was writing the screenplay in 2006, had anticipated for production to begin later in the year. However, Rodriguez had also said that official casting would not start until the script was finalized and in studio’s hands. At the 2007 Comic-Con, Frank Miller confirmed that he and Robert Rodriguez had completed a script, but blamed the Weinstein brothers for the delay.

Rosario Dawson, who played Gail in Sin City, said in March 2006 that Rodriguez “has been interested in Angelina Jolie for the lead”. A subsequent article that month said that Jolie, Salma Hayek, and Rose McGowan have “been tipped to play” the role.

Miller in November 2007 said without explaining that delays in producing Sin City 2 would lead to a Sin City 3 as well, with Rodriguez saying the third film would adapt Miller’s Hell and Back story featuring the character Wallace. Rumours indicate that Johnny Depp will play the lead.

On April 7, 2009, it was reported that The Weinstein Company had lost the rights to the prequel. Weinstein lawyer Bert Fields quickly denied this, saying: “TWC’s rights to produce sequels to Sin City remain intact as they always have been. Any suggestion to the contrary is complete hogwash.”

In October 2009, producer Stephen L’Heureux of Solipsist Films said Sin City 2 would go into production sometime in the second half of 2010. Unlike the first film it will include new material by filmmaker Frank Miller; the first film was strictly based on his graphic novels.

With the death of Brittany Murphy in December 2009, it is unsure if the character Shellie will be recast or written out of the sequel, as Shellie plays a significant role in A Dame to Kill For and appears in the short story Blue Eyes, which ties directly into A Dame To Kill For and would likely feature into any sequel based on that story arc.

On October 29, 2012, it was confirmed that Devon Aoki would not return to reprise her role as Miho due to her second pregnancy, and that Jamie Chung would take over the role in the second film. On December 5, 2012 it was announced that Dennis Haysbert would replace Michael Clarke Duncan (who died before production began) as Manute. On January 7, 2013, it was confirmed that Joseph Gordon-Levitt was cast as new character Johnny, described as “a cocky gambler who disguises a darker mission to destroy his most foul enemy at his best game“.