Soul Surfer is an upcoming 2011 American biographical teen drama film directed by Sean McNamara. The film is an adaptation of the 2004 non-fiction book Soul Surfer: A True Story of Faith, Family, and Fighting to Get Back on the Board by Bethany Hamilton, who lost her left arm in a shark attack when she was 13 years old. The screenplay for the film was based Hamilton’s book along with interviews with the family by the filmmakers to learn about unpublished conflicts to include in the film. The film stars AnnaSophia Robb as Hamilton with Dennis Quaid and Helen Hunt playing Hamilton’s parents. 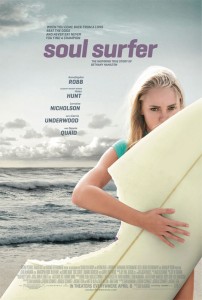 Soul Surfer is about the true story of Bethany Hamilton who’s known for surviving a shark attack in which she lost her left arm, and for overcoming the serious and debilitating injury to return to surfing.

Plans for a film existed since shortly after the shark attack on Hamilton in 2003 and her subsequent recovery. After several false starts to production, McNamara was attached to direct the film. Filming took place in Hawaii in early 2010, and Robb wore a green sleeve on her arm so visual effects could be added in post-production to create the appearance of a stump. Additional filming took place in Tahiti in August 2010.

In 2003, Bethany Hamilton (AnnaSophia Robb), a champion surfer, has her left arm tragically amputated via shark attack. She fights through this tragedy and eventually gets back to surfing.

Bethany has become a source of inspiration to millions through her story of determination, faith and hope. Born into a family of surfers on February 8, 1990, Bethany jumped on the board at a young age. Bethany entered her first surf competition—winning both the short and long board divisions at age eight. On Halloween morning 2003, Bethany was attacked by a 14-foot tiger shark, which bit off her left arm and seemed to end her career as a rising surf star. After losing more than 60% of her blood and undergoing several surgeries, Bethany began her recovery with an unbelievably positive attitude. Miraculously, just one month after the attack, Bethany returned to the water. Two months later, Bethany placed fifth in the Open Women’s division surf competition and just over a year after the attack she won her first National Title. In 2007, Bethany realized her dream and turned pro. Bethany has since participated in numerous Association of Surfing Professionals and World Tour Events with her major highlight being a second place finish in the ASP 2009 World Junior Championships. “It has been an incredible journey for me and now, I’m just so excited to share it!” says Bethany.

Soul Surfer is directed by Sean McNamara and is based on the 2004 biography Soul Surfer: A True Story of Faith, Family, and Fighting to Get Back on the Board. The book and the film are based on the real-life experience of Bethany Hamilton, who lost her left arm as a result of a shark attack while she was surfing. She was 13 years old when she was attacked on October 31, 2003. Though she lost her arm, she was motivated to resume surfing and was able to compete in a major surfing competition on January 10, 2004, finishing fifth. Her story of recovering from the attack became widespread, and her family faced multiple media opportunities.

Shortly after the incident and the media attention, the father of Bethany’s friends Chantilly and Tiffany, Roy “Dutch” Hofstetter, became the Hamilton family’s media manager. Hofstetter in February 2004 envisioned a film based on Bethany’s experience, provisionally titled The Bethany Hamilton Story. Bethany published her biographical book Soul Surfer in 2004, and BBC reported that a film about her life was scheduled to begin filming in January 2005.

Though production had not begun by the end of 2006, in January 2007 Sean McNamara was announced to be directing the biographical film. While Hamilton had a series of surfing successes, turning pro in 2007, McNamara and producer David Brookwell sought more material for the film. The book was considered “a straightforward account” that was targeted to Christian readers, so the filmmakers met with the Hamilton family to determine if there were any unpublished conflicts that could be highlighted in the film. They discovered that the incident had strained the family, that family members questioned their Christian faith, and that Bethany Hamilton struggled with her physical appearance and how boys would perceive her. The media attention on the family was described by Brookwell as “a second shark attack” that had made their lives uncomfortably public.