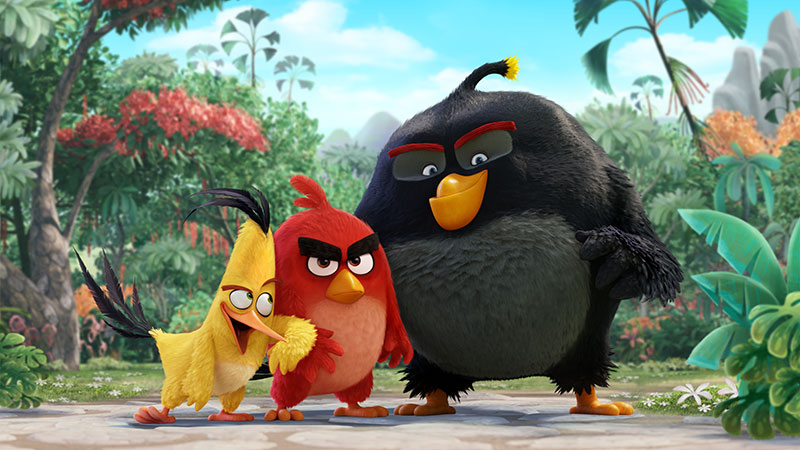 The movie takes us to an island populated entirely by happy, flightless birds – or almost entirely.  In this paradise, Red (Jason Sudeikis, We’re the Millers, Horrible Bosses), a bird with a temper problem, speedy Chuck (Josh Gad in his first animated role since Frozen), and the volatile Bomb (Danny McBride, This is the End, Eastbound and Down) have always been outsiders.  But when the island is visited by mysterious green piggies, it’s up to these unlikely outcasts to figure out what the pigs are up to. 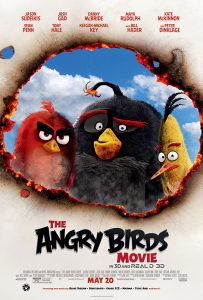 Red, naturally, is a good example of a character who had to make the transition. Even before a computer model could be built, character art director Francesca Natale did 100 possible designs for Red with ink and paint.

In December 2009, people around the world downloaded a game to their phones and started a phenomenon.  Little green piggies had invaded, intent on stealing the eggs of some flightless birds – and these birds were… well, there’s only one word for it.  How would you feel if someone came to your home and took your kids?

The first conversations about turning Angry Birds into a movie began back in 2011 with executive producers Mikael Hed and David Maisel.  David Maisel, who had previously been the founder of Marvel Studios and an architect of its plans to begin a slate of movies including Iron Man, Thor and Captain Americawas looking for a new challenge.  “I had purchased my 80-year-old mother an iPad, and one day, I heard her swearing at some pigs,” he recalls.  “I got very intrigued – this game is played by kids, by their parents, by their grandparents.  It’s one of the few things in culture today that people of all different generations share.”

Maisel contacted Mikael Hed, the founder of Rovio and now executive producer of the movie.  “I got a phone call from Hollywood, asking whether they could create a movie around Angry Birds.  And that was really the first time that it dawned on me that a movie could really actually happen.  That was the starting shot for this adventure.”

To produce the film, Rovio created Rovio Animation, which would retain creative control over the characters and self-finance the motion picture.  In this way, Rovio could ensure that the core elements that audiences love about Angry Birds would make their way into the final film.  In 2012, Hed, MikkoPolla(a creative executive at Rovio) and Cohen collaborated to develop the film’s original story.

Building an animation studio from scratch brought together a wide variety of some of the top talent working in animation. Cohen, Hed and Maisel first hired screenwriter Jon Vitti, who is a “Simpsons” all-star, having written many episodes of the long-running series and collaborating on The Simpsons Movie. Cohen then brought Catherine Winder onboard to produce the film with him.  Winder had previously served as an executiveat Twentieth Century Fox Animation.  In 2013, Sony Pictures came on board as the distribution partner.

According to producer John Cohen (Despicable Me), the classic game was a great starting point for the movie the filmmakers wanted to make.  “Inside the game’s core concept were the seeds of what we believed could grow into a fantastic animated comedy,” he says.  “We had the chance to expand on the game characters, developing the birds into fully fleshed out characters with distinct personalities and fun, unique powers.  But there’s also a strong, emotional idea at the center of the movie: at the heart of the games is a story of angry birds who have had their eggs – their children – taken by these green piggies.  And the birds must launch a search-and-rescue operation to get their kids back.”

Working with the Rovio team, the filmmakers developed and expanded the basic ideas from the game.  “The question Rovio gets asked more often than anything else is, ‘Why are the birds so angry?’” says Cohen.

In fact, Clay Kaytis, who directs the film with Fergal Reilly, says that the built-in audience of the game allowed them to subtly subvert audiences’ expectations.  “People assume they know what the movie is going to be because they’ve played the game,” he says, “but the truth is, we’re creating something that is going to surprise people when they see it. ” So, out of the basic premise of the game, the filmmakers created a new story – a character-based comedy.

As the characters took shape on the page, it came time for the filmmakers to cast the actors who would bring them to life.  “When an actor comes into a recording booth to perform, they are stripped of all of the tools in their repertoire – they no longer have their physicality, facial expressions, any movements or gestures, other actors to play against – they are left with only their voice,” says Cohen.“Great improvisational comedic actors, like JasonSudeikis, Josh Gad, Maya Rudolph, Danny McBride, Keegan-Michael Key or Kate McKinnon, are able to not only come up with terrific observational comedy ideas, but by doing that, they give their performance a very naturalistic feel, which really helps to bring these characters to life in animation.”

“It’s a magical moment when you hear these actors for the first time in their characters,” says executive producer Mikael Hed.

In every way, The Angry Birds Movie is the culmination of a long-term plan to expand the game onto the big screen.  Though the graphic characters from the game have been featured in other media, such as Angry Birds Toons, the movie takes the franchise to epic new levels.  For example, Rovio made the conscious decision never to show the birds speaking, or having wings and legs – until now.  “Rovio went to great lengths to protect that origin story, so that we would be telling it for the first time in this movie,” says Maisel.

The filmmakers built two major locations – the lush, organic world of Bird Island, and the off-kilter, teetering world of Pig Island.  And into these worlds, the artists were able to let their comic imaginations fly.  “There’s a ton of visual jokes,” says production designer Pete Oswald.  Between Bird Island and Pig Island, there are over 90 locations in the film.

In addition to the hilarious performances by some of the biggest names in comedy, The Angry Birds Movie is loaded with fun, original musical performances to the film. Country superstar Blake Shelton not only co-wrote and performs the original song “Friends,” but also voices a role in the movie,as Earl, a cowboy pig.

Pop star Charli XCX joins in with “Explode,” electro house musician Steve Aoki provides the new track for a rave scene, Matoma’s “Wonderful Life” is featured, and the audience will get up and dance as Demi Lovato brings down the house with her brand new rendition of the classic “I Will Survive.”