The Eagle is a film adaptation of the 1954 historical adventure novel The Eagle of the Ninth by Rosemary Sutcliff. Directed by Kevin Macdonald from a script by Jeremy Brock, the film is set in the 2nd century AD and tells of a young Roman officer’s search to discover the truth about the disappearance of his father’s legion in the north of Britain. The story is based on the legend of the Legio IX Hispana (Ninth Spanish Legion) which is alleged to have disappeared in Britain in around AD 117. 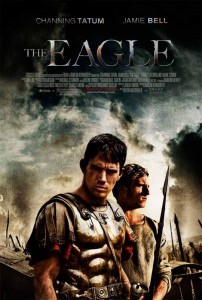 The Eagle is the story of a young Roman soldier endeavors to honor his father’s memory by finding his lost legion’s golden emblem in Roman-ruled Britain.

In AD 140, a young Roman centurion attempts to uncover the truth about the disappearance of his father’s legion—the Ninth—in the north of Britain 20 years previously. The centurion, Marcus Aquila (Channing Tatum), travels with a British slave, Esca (Bell), beyond Hadrian’s Wall into Caledonia (now known as Scotland) where he must confront the Pictish tribes to recover the legion’s eagle standard and restore his father’s reputation.

Principal photography began on August 24, 2009 in Hungary, which will double for England. In October, production moved to Scotland, where filming took place in Wester Ross and at Loch Lomond, among other locations. The film is being made for £15 million by producer Duncan Kenworthy’s Toledo Productions for co-financiers Focus Features and Film4. Kevin Macdonald is directing from a script by Jeremy Brock, who adapted the 1954 historical adventure novel of the same name by Rosemary Sutcliff. The director of photography is Anthony Dod Mantle, production design is by Michael Carlin, the costume design is by Michael O’Connor and Justine Wright will edit the film—her fifth for Macdonald. At the 62nd Cannes Film Festival in May 2009, The Eagle of the Ninth secured distribution deals “for every global market”.

Director Kevin Macdonald intends the film to be historically authentic, but as little is certain about the tribes that the Romans encountered — they were probably Celts, but some may have been Picts—he has made concessions. For example, the tribespeople will speak Gaelic, even though the language probably did not enter widespread use in the region until the 5th century AD; Pictish is the more likely language to have been spoken at the time. “It’s the best we can do,” Macdonald said, “All you can do is build on a few clues and trust your own instincts. That way, no one can tell you you were wrong.”

Only 1% of Scots speak Gaelic, limiting the talent pool to just 60,000 people; by August 2009, several Gaelic-speaking boys had been auditioned without success for the role of “the young tribal hero of the movie”, so Macdonald held open auditions in Glasgow for the role. The character is between nine and twelve years old and known as “seal boy”. The role of Seal Boy was eventually won by a boy from Belfast who had been educated in Irish Gaelic, not unlike Scottish Gaelic.

Achiltibuie, a village in northwest Scotland, was used as a filming location for the “seal people”. Filming started in Achiltibuie on October 7, 2009 and finished on October 15, 2009. The main location was Fox Point, Old Dornie. The Pictish village which was constructed at Fox Point was used on most days of the filming. Other sites included Achnahaird beach where a horse chase was filmed and Loch Lurgainn. Macdonald intended to use locals as extras. This was a success with many locals appearing as extras after going to castings in nearby Ullapool. Their roles included “Seal Warriors” , “Seal Princesses” and “Elders”.