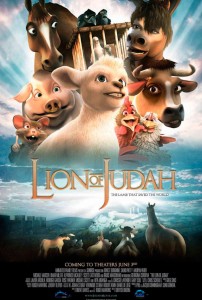 The Lion of Judah follows the adventures of a bold lamb and his stable friends as they try to avoid the sacrificial alter the week preceding the crucifixion of Christ.

The Lion of Judah, a laugh-filled, heart warming story seen through the eyes of a zany cast of stable animals. An eye-opening adventure with a lovable pig (Horace), a faint-hearted horse (Monty), a finicky rat (Slink), a rambling rooster (Drake), a motherly cow (Esmay), a downtrodden donkey (Jack) and a heroic lamb (Judah).

Upon learning that Judah has been trapped in the clutches of the townspeople and faces the possibility of being the sacrifice at the annual Festival, the stable mates leave their cozy barn and embark on a hilariously funny series of adventures to find and free their friend.

During their numerous attempts to find Judah, a wonderful story emerges as they intercept, interact and entwine with history finally seeking out the King, who was born in their stable more than 30 years earlier. The antics crates a uniquely funny and entertaining epic as it winds its way through numerous side-splitting encounters and historical scenes.

AMG Films, a division of AMG Holdings located in West Palm Beach, Fla., has signed a five-year first-look deal with the Warner Bros. Home Entertainment Group for television, DVD and digital rights in the U.S. and select foreign territories.

The Lion of Judah will be the first film under the deal to be released to the home entertainment market by Warners. It will first play about 1,000 theaters through a separate distribution deal with Rocky Mountain Pictures.

Other films that AMG is developing include An African Tale, an animated family film about jungle and plains animals overcoming their mistrust of each other; Bethlehem or Bust, a prequel to The Lion of Judah; Perfect Wave, a live-action movie telling the true story of surfer Ian McCormack; Heart of a Man, based on the story of 18th century seaman John Newton; and Our Father, a dramedy written by Gene Quintano and the late John Candy.