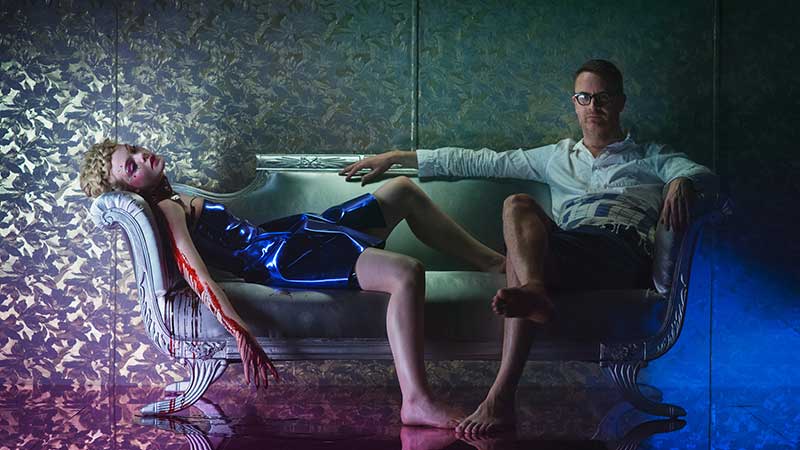 When aspiring model Jesse moves to Los Angeles, her youth and vitality are devoured by a group of beauty-obsessed women who will use any means necessary to get what she has in The Neon Demon, the new horror thriller from Nicolas Winding Refn (NMR). 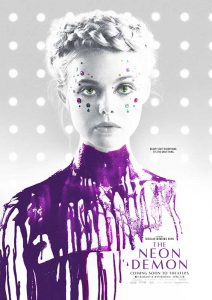 Once production began on The Neon Demon, the story continued to evolve, a process common on all of NWR’s films and a unique creative benefit of shooting in chronological order.

The second film in a two-picture deal between Space Rocket, NWR’s production company with producing partner Lene Børglum, and French film financing entities Wild Bunch and Gaumont, The Neon Demon first arose in NWR’s mind long before production commenced on the first film in their deal, 2013’s Only God Forgives.

“For a number of years, I’ve had this interest in making a film about beauty, because, I’m surrounded by it,” NWR says, referring to his wife, filmmaker Liv Corfixen (My Life Directed by Nicolas Winding Refn), his two young daughters, and, presumably, the myriad actresses and models he’s encountered directing both feature films and fashion advertisements for brands like Gucci, YXL, H&M and Hennessey. “And I see a lot of female empowerment with beauty.”

Fertile ground for exploring tales of madness and obsession, the horror genre emerged the perfect vehicle for NWR’s blossoming tale. But before beginning his initial foray into the genre, the director would undergo a thorough examination of it – a task he undertook with guidance from his friend, BBC executive and Only God Forgives executive producer Matthew Read. “With Matthew, we started to really try and understand why horror films work and why they don’t work and the various sub-genres. And then to really break the horror film down into a mathematical equation,” says NWR.

Known for both embracing and subverting such well-worn genres, NWR was similarly curious to see if he could both honor and defy the “horror movie” equation with his developing story. “Was there a way to hit all of the basic genre beats, but not necessarily in the right order?” And could he “make a horror film without the horror?”

Another challenge was crafting his first female-centric narrative. Although NWR’s past films have included strong supporting female characters NWR had never developed a film with a female lead, let alone four of them.

To help give voice to The Neon Demon’s quartet of young female characters, NWR sought collaboration with a young female writer – preferably one with a background in the more dialogue-intensive world of theater. After directing three films he describes as “silent,” NWR sensed The Neon Demon would be a more dialogue-driven affair and wanted someone strong in that area.

NWR found all three qualities in two female writers from opposite sides of the Atlantic: one a well-known British playwright, the other an up-and-coming American one. His first collaborator was London-based playwright Polly Stenham, who came to international theater-world attention at the precocious age of 21, when her debut play “That Face” premiered at London’s Royal Court Theatre in 2007 to rave reviews and earned her the Evening Standard Award for Most Promising Playwright and the Critics’ Circle Award for Most Promising Playwright (2008). The second was Texas-born playwright Mary Laws, a recent graduate of the prestigious Yale Drama School already gaining traction in the industry for her bold and innovative student plays. On the recommendation of his agent, NWR read Laws’ work and, impressed, reached out to her.

Although NWR had basic story and character ideas in mind at the outset of the script’s development, Stenham and Laws helped him build a full-bodied – and full-blooded – narrative around them.

While serving on the 2014 Cannes Film Festival jury, NWR told fellow juror and filmmaker Sofia Coppola about his next project: the female-driven horror thriller The Neon Demon. She, in turn, advised him to get in touch with Los Angeles-based casting directors Nicole Daniels and Courtney Bright, whom she cited as having a knack for finding exciting up-and-coming young talent.

The first and most pivotal role to cast with Jesse, a seemingly innocent young beauty from small town Georgia whose character slowly starts to transform as her modeling career takes off. NWR immediately had Elle Fanning in mind for the part. “To me, Elle Fanning is a blend of the greatest silent movie stars of the past and the most cutting edge actresses of today. She has this magnificent ability to transform herself. NWR adds: “And the camera just loves her.” When NWR told her that the film’s storyline would revolve around models and fashion, however, her enthusiasm spiked, being not only a fashion fanatic but someone inadvertently involved in that world. Fanning was also excited about playing a less innocent kind of “beauty” than she did as Princess Aurora in 2014’s blockbuster hit Maleficent.

Contributing to this “girl power” element is a strong female-led cast that includes Jena Malone in the role of Ruby, an L.A. makeup artist who is the first of a triumvirate of vicious beauties to fall under the spell of Fanning’s beauty. Like Fanning, Malone began acting at a young age. In preparation for her role, Malone consulted with a close makeup artist friend. “I played with her makeup – on her and on me – and got familiar with her kit and the setup.” In addition to practicing applying makeup on the living, Jena also volunteered at the Hollywood Forever Cemetery morgue, since her character moonlights as a mortician.

Working on a living body, albeit her own, is a full-time occupation for model Gigi, a self-professed plastic surgery addict and the second in Demon’s trio of covetous beauties, played by up-and-coming Australian actress Bella Heathcote. Like many of her fellow Aussie actors, Heathcote began her career on the soap opera “Neighbours” before coming to international attention for her role as Victoria Winters in Tim Burton’s big-budget adaptation of the gothic soap opera Dark Shadows.

Following her breakout performance in the international box office smash Mad Max: Fury Road, Abbey Lee continues her bold and successful transition from the world of modeling to acting with her new role as Sarah, whom she describes as the most “primal” of the three vicious beauties seeking to devour Jesse’s beauty.

Despite shooting commercials in the high-end fashion world, NWR was not as familiar with Lee’s extensive modeling background as his family and leading actress. “It wasn’t until my wife told me that she was a big supermodel that I learned about her past. I just saw her at a cold reading and she was very good – and very beautiful. But very fragile. And that’s what the character needed.” During the making of the film, Abbey’s modeling experience would prove an asset to the film’s talent, both in front of and behind the camera.

Argentinean-born cinematographer Natasha Braier set out to find the perfect film lenses to enhance the natural beauty of the images she would be capturing on the Alexa digital camera. “I spent two months finding the right set of anamorphic lenses and then fixing them because I chose a very old set that not a lot of people use anymore. They’re called “Crystal Express” and they were made by Joe Dunton, who is a legend in the anamorphic field.”

Another key hire on the film was costume designer and past NWR collaborator Erin Benach, with whom NWR created a new kind of style icon in Ryan Gosling’s Driver character in 2011’s Drive. The two reteam on The Neon Demon, another L.A.-based project, albeit one with far more elaborate and extensive costume needs and, as a result, the chance to create a whole series of potentially iconic looks.

To cut The Neon Demon, NWR enlisted longtime editing partner Matthew Newman. “When I first hired him (on the 2007 British TV movie ‘Agatha Christie’s Marple’), I never imagined that our paths would be so intertwined,” says NWR. “But that was a great experience. And then I hired him to do Bronson and, from then on, he’s become very instrumental in helping me alter my ways of making films.” NWR places such trust in Newman that he engages him in the entire filmmaking process, from script development to post.

For Nicolas Winding Refn, the decision to set his meditation on beauty and the fashion world in Los Angeles – as opposed to the more commonly regarded high-fashion centers New York or Paris – was born out of considerations both practical and creative. “It was a combination of two things: After shooting Only God Forgives in Bangkok, I wanted to do a film in Tokyo, and Liv said, ‘I’m not living in Tokyo.’ Then I asked her, ‘What’s a compromise?’ And she said, ‘L.A.’”

Shooting in Los Angeles, however, would present director NWR with a series of unique challenges; primary among them was finding a great crew on a small budget. “One of the first challenges in L.A. is that it’s an expensive city to shoot in. So it was difficult getting a crew for the amount of money I had. But I think that forced me to…really go outside of my comfort zone and work with people who are much more new and fresh; people who were on the verge of breaking into the industry in a much bigger way, which actually added to the movie.”

Principal photography on The Neon Demon commenced in Los Angeles, California, on Friday, March 27, 2015, and wrapped on Friday, May 22, 2015. “Each of the locations have a very powerful aesthetic,” adds Producer Lene Borglum, referring to the various historic locations shot in the film, which include Downtown L.A.’s Orpheum Theater, the American Cement Building on Wilshire Blvd., and the Paramour Mansion in Silver Lake.

To create the perfect musical soundscape for his first horror thriller, NWR reteamed with Cliff Martinez, who previously composed the celebrated scores for his films Drive and Only God Forgives, as well as for Liv Corfixen’s My Life Directed By Nicolas Winding Refn.