Sean Asa (Ryan Guzman), his pal Eddy (Misha Gabriel) and their boundary-breaking dance crew, The Mob, were riding high when they came to Los Angeles as the stars of a high-profile ad campaign. A year later, they can’t even get an audition in the ultra-competitive world of professional dance. Most of the group is ready to return to their Miami roots, but Sean is determined to conquer Hollywood, even if he has to do it alone. 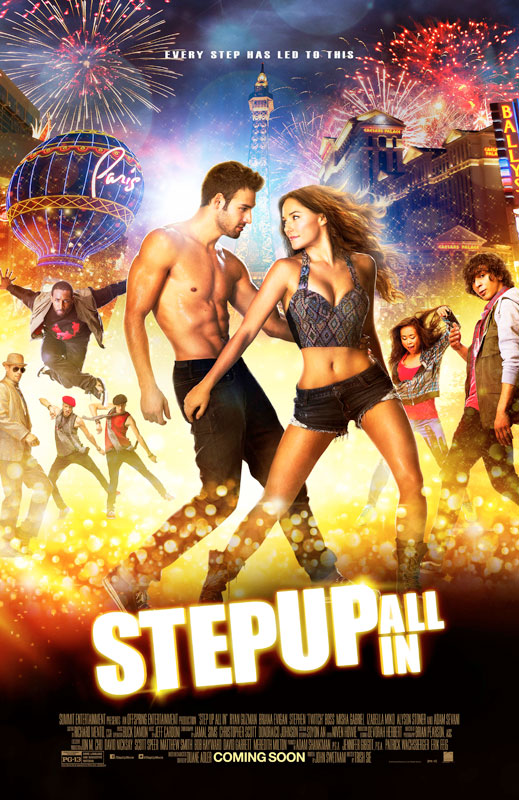 With dazzling production values, gripping competition, tender romance and awe-inspiring dance sequences, the fifth installment of Step Up is the most fun and upbeat to date, according to producer Gibgot, who credits everyone involved for bringing their A-game.

In 2006, Jennifer Gibgot and her brother Adam Shankman launched a worldwide dance juggernaut with the first Step Up, a high-energy hip-hop romance that paired a street-smart b-boy with an ambitious ballerina. After building on the film’s international popularity to create three follow up chapters that have defined a new genre of dance movies, the producers of Step Up once again bring their unique blend of urban grit and classical craft to Step Up All In, the franchise’s most compelling chapter yet.

Like its hit predecessor, Step Up Revolution, Step Up All In takes the franchise in a new direction. Where Revolution explored the world of the flash mob and their very public statements, this new film takes a close look at the life of professional dancers. Shankman, who began his career as a dancer before becoming a successful choreographer, director, and producer, wanted to make a movie about the challenges of that life. “We explore what it’s like to be an adult trying to build a career in this world, which is incredibly difficult, and we frame it with fun and sparkle,”

With a wide-open roster to fill, the producers decided to bring together favorite cast members from each of the previous movies. “One of the unique things about the franchise is that, for the most part, each movie has had a new cast of dancers carrying a new storyline,” says Gibgot. The producers took their cue on casting from the franchise’s significant social media presence. To helm the latest production, the producers brought in director Trish Sie, whose viral videos, particularly the ones she created for the Los Angeles-based band, OK Go, created an Internet sensation.

Placing Ryan Guzman, who first played Sean Asa in Step Up Revolution, at the head of the cast of the fifth film is the continuation of a long tradition in the Step Up world. Six years had passed since Evigan starred in Step Up 2: The Streets. During that time, she had focused her energy on acting and was happily surprised when the producers asked her to reprise the role of rebellious and resilient street dancer Andie. “I was pretty ecstatic about it,” Evigan says.

The return of Adam Sevani as Moose, stand-out fan favorite in three previous Step Up movies, was a given for the producers. Upbeat, charming and a little bit goofy, Moose is a smart kid who can also dance. In Step Up Revolution, leading choreographer and dancer Misha Gabriel played Eddy, Sean’s co-leader of the unruly street performers that make up The Mob. He readily steps back into Eddy’s dancing shoes, this time sharing leadership of the crew with tWitch.

After experiencing the electrifying, gravity-defying production numbers created for Step Up All In, audiences will likely be shocked to learn that there are no special effects or computer-assisted stunts in the film, says director Trish Sie. The awe-inspiring choreography is all performed live for the camera. Their secret weapon was choreographer Jamal Sims, who has worked on all five installments of Step Up.

Believe it or not, the choreographers found inspiration for the explosive climax in an unconventional place—Home Depot. “Big ideas sometimes come from very small steps,” he says. “We found these little trash wheelies at Home Depot that the b-boys wound up using in the finale. We saw sand and fans, which gave rise to the idea of using the elements of earth, air, fire and water for LMNTRIX’s final number.”