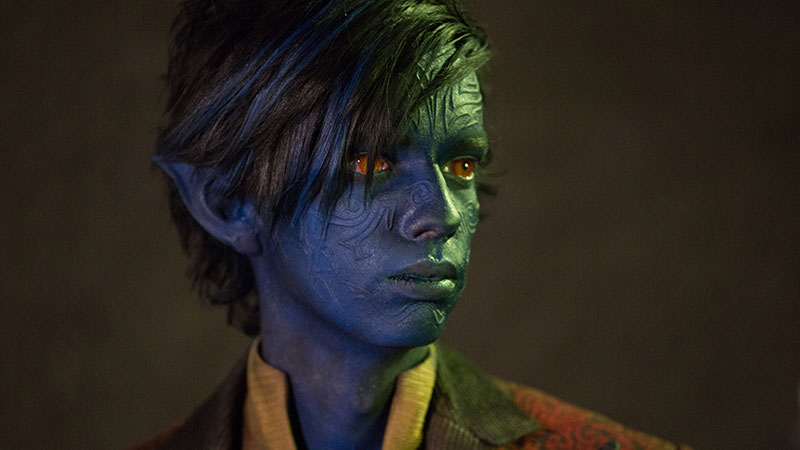 In 1983, the invincible and immortal Apocalypse is set free after being entombed for several millennia. Enraged that his kind are no longer treated as gods, Apocalypse assembles a team of powerful mutants, including a disheartened Magneto, to destroy humankind and create a new world order, over which he will reign. To end Apocalypse’s path of global destruction, Raven (Jennifer Lawrence) and Professor X (James McAvoy) lead a team of young X-Men in an epic showdown with a seemingly unstoppable enemy. 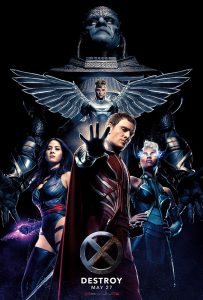 The challenge in designing the special makeup effects for Apocalypse was to avoid hiding Oscar Isaac. His transformation initially took three and a half hours, but with some practice the team of two was able to bring it down to an hour and a half.

The critically hailed blockbuster X-MEN: DAYS OF FUTURE PAST was a tough act to follow.  Moreover, the filmmakers’ goal was to not only live up to the expectations set by that film, but to exceed them.  “We had a real challenge to come up with a story that could surpass DAYS OF FUTURE PAST in terms of scale and stakes,” notes writer-producer Simon Kinberg, who served in those capacities on that film.

A creative breakthrough came with the decision to have the new film’s antagonist be the most powerful mutant villain in the entire X-Men universe.  “Apocalypse poses a cosmic threat and that sense of scale appealed to director Bryan Singer and me,” Kinberg adds.

Given Apocalypse’s vision of global destruction, it’s no surprise that this is the most visually ambitious of the X-Men pictures.  “We’re not only traveling the world, we’re talking about the potential end of the world, and perhaps the end of the universe,” says director of photography Newton Thomas Sigel, who previously collaborated with Singer on X-MEN: DAYS OF FUTURE PAST, X2, and X-MEN, among other films.  Adds Oscar Isaac, who plays the seminal figure: “The stage is set for an epic mutant versus mega-mutant war.  The battle between the X-Men and Apocalypse is insane!”

Oscar Isaac, who took on the role of Apocalypse following his star turn as the heroic starfighter pilot Poe Dameron in STAR WARS: THE FORCE AWAKENS, calls the character nothing less than “the creative/destructive force of this earth.  When things seem like they’re no longer evolving—like they did in the 1980s—he destroys those civilizations.” The role required a juxtaposition of cruelty and violence with a unique kind of humanity.  It’s a delicate balance that Isaac executes with consummate skill.  “Oscar has all of the different colors of the greatest actors,” says Kinberg.

The filmmakers used a unique process to create Apocalypse’s voice.  Singer explains:  “It’s always Oscar’s voice, but during ADR, in addition to a standard Sennheiser microphone, I used a bass mic near his right cheek, and to his left cheek I used a bass drum mic, like a musician’s mic, so I could pull vocal tones that would not normally be heard by the human ear.  With three microphones at his face, Oscar always had to keep his head in the right spot!”

Raven, a blue-skinned shapeshifter, is seeking her true purpose, as well as elusive self-acceptance.  “The character is more ‘Raven’ than ‘Mystique’ in this story because she cannot be her true mutant self in a world that she feels is still not as mutant-friendly as it’s perceived to be,” says Oscar®-winner Jennifer Lawrence, who first played the role in X-MEN: FIRST CLASS and then reprised it in X-MEN: DAYS OF FUTURE PAST.

Xavier is a powerful telepath whose greatest gift, says James McAvoy, who reprises the role, is “his empathy and ability to teach.  The events of the last film left him hopeful and more responsible.”

Xavier’s closest friend and fiercest rival, Magneto is played by Michael Fassbender, who again takes on the role of the powerful mutant.  Apocalypse’s Four Horsemen, circa 1983, are: Magneto, Psylocke, Angel and Storm.  Psylocke, portrayed by Olivia Munn, is a powerful telepath and trained ninja assassin. Olivia Munn’s Psylocke costume is straight from the comic book.

Storm (whose given name is Ororo Monroe) is an orphan raised as a thief on the streets of Cairo.  Portrayed by Alexandra Shipp, Storm possesses the ability to control all aspects of the weather.  “This Storm is more reckless and emotionally driven than the adult Storm we know from the previous X-Men films, starring Halle Berry,” says Shipp.

New to the X-Men movie universe is Jubilation Lee/Jubilee, played by Lana Condor.  Jubilee has the ability to shoot pyrotechnic energy blasts from her hands.

Another newcomer to Xavier’s school is Kurt Wagner/Nightcrawler, whose demonic-looking appearance, blue skin, yellow eyes and long, barbed tail, made him an outcast well before the emergence of his mutant powers, which include superhuman agility and teleportation (and the accompanying “BAMF!” sound).  Nightcrawler is introduced here as a shy, emotional and naïve figure, who is also uncommonly wise—a quiet prophet, of sorts.

Kodi Smit-McPhee (RISE OF THE PLANET OF THE APES) plays the character, which the young actor believes will resonate with audiences.  “At his core, Kurt is traditional, happy, swashbuckling, joyful, as well as faithful and vulnerable,” he explains.

Special effects makeup department head Adrien Morot and his team worked on Nightcrawler and the four Ancient Horsemen of the Apocalypse.  For the Horseman “Death” they created a look inspired by the desert and pyramids—an almost mummified, dry, cracked appearance. The skin looked like old parchment.   “/The Horseman/ Pestilence resembled an aquatic creature in shades of blue with keloid scars on the face and magnificent grayish eyes.  His entire head was prosthetic, so the scars were integrated.

If director Bryan Singer is the guru when it comes to the X-Men and their capabilities, then two-time Academy Award-winning visual effects supervisor John Dykstra is the magician who fulfills his prophecies. “Superheroes can’t do anything without visual effects,” jokes Dykstra.

Shooting in native 3D stereo adds another dimension to the magic, so the VFX department had to deal with “the wrap,” which is the ability to see around the edges of things.  “It changes how things are placed in the composition, the way things break the edge of frame, the brightness of objects to maintain detail in order for them to render as two separate eye images and have shape,” explains Dykstra. He describes the process as “roughly like the difference between color and black and white, but no more difficult than anything else.  The audience’s appetite for more sophisticated images grows exponentially and the ability to keep up with that is always our biggest challenge.”