Code named ‘The November Man’; Peter Devereaux (Pierce Brosnan) is an extremely dangerous and highly trained ex-CIA agent, who is lured out of quiet retirement on a very personal mission. He must protect valuable witness, Alice Fournier, (Olga Kurylenko) who could expose the truth behind a decades-old conspiracy. He soon discovers this assignment makes him a target of his former friend and CIA protégé David Mason (Luke Bracey). With growing suspicions of a mole in the agency, there is no one Devereaux can trust, no rules and no holds barred. 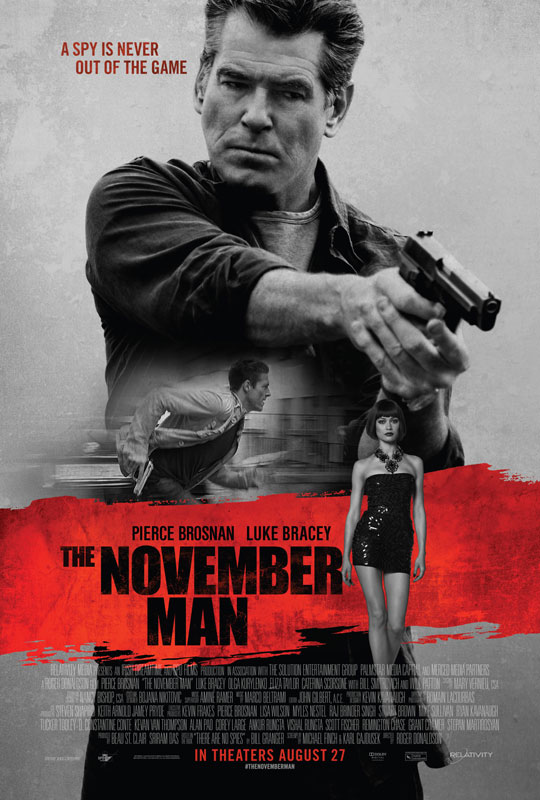 Director Roger Donaldson, was so impressed by Belgrade that he immediately saw it as a very real and tangible character in the film and set out to take advantage of the rich variety and texture the city backdrop offers.

With a screenplay by Michael Finch & Karl Gajdusek based on Bill Granger’s novel “There Are No Spies” from the bestselling November Man book series, The November Man is the ultimate cat and mouse game set in the world of international espionage. Directed by Roger Donaldson, the film is produced by Beau St. Clair of Irish DreamTime and Sriram Das of Das Films.

When producer Beau St. Clair hen producer Beau St. Clair first considered first making an espionage thriller back in 2008, she knew that she would have to find something really exceptional to entice lead actor Pierce Brosnan back in the role of a spy. Neither she nor Brosman, her co-founder and partner in their production company, Irish DreamTime, wanted to retread old ground.

It was executive producer Dino Conte who first put the November Man book series by US author Bill Granger in the front of St. Clair. Written from the late ’70’s onwards, the thirteen books in the series offered a strong, complex and intriguing central protagonist in Peter Devereaux.

Screenwriters Michael Finch & Karl Gajdusek (individually co-writers of Predators and Oblivion) started with a considerable amount of research and development. Not only did they read all thirteen of Granger’s books to get into the heads of the key characters, but they also looked at the political realities of the 1980’s, when the author was writing the book, to compare and then update to where we are today in an exciting way.

Screenwriters Michael Finch and Karl Gajdusek on board to work on the script and St. Clair started looking for a like-minded independent producer to work with her from script development to screen. she found him in Siriam Das of Das Film.

Although originally scripted for Berlin, costs for filming there led the producers to consider other locations and Producer Sriram Das found himself visiting many of Eastern Europe’s capital cities. His visit to Belgrade, Serbia in 2012 proved to be a complete revelation. The beautiful and cosmopolitan city had rarely been showcased in international films before and the range of locations on offer, together with the generous cooperation of the City and Serbian Government, was almost unheard of. Added to this, an established film industry meant high quality and experienced crew right on their doorstep.

The film has no shortage of edge-of-your-seat action, so both the stunt and the SFX team were kept busy on set. Award winning stunt coordinator Mark Mottram, who worked with Pierce on three of the Bond films, also served as his stunt double. He had a core team of four, which included two additional stunt doubles, a stunt rigger, and a stunt utility bike and car specialist. Some scenes were so elaborate that 30 Serbian and Russian stuntmen joined the British team, particularly for car chases which required real precision driving through the often narrow streets of Belgrade.