The Other Guys is a 2010 action-comedy crime film directed and co-written by Adam McKay. The film stars Will Ferrell and Mark Wahlberg, and co-stars Dwayne Johnson, Samuel L. Jackson, Michael Keaton, Eva Mendes, Steve Coogan, and Ray Stevenson. It was released on August 6, 2010. This film is the fourth collaboration between Ferrell and McKay. 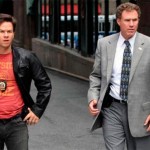 In its first night of release, The Other Guys made $13 million, placing first for the night. It had a large opening weekend take of $35,600,000, placing it at number one for the weekend of August 6-8, 2010. The film displaced Inception from the number one spot.

Principal photography for the film began on September 23, 2009 in New York City, with additional scenes filmed in Albany, New York.

Detectives Danson (Dwayne Johnson) and Highsmith (Samuel L. Jackson) are pursuing a group of criminals in a Cadillac Escalade. After a brief firefight that results in the hood of Highsmith’s Chevy Chevelle getting blown into the windshield, the two inadvertently crash into the side of a double decker bus.

Danson drives it after the criminals and meticulously slingshots the trapped car out the other side of the bus (with Highsmith firing the whole time) and crashing into the Trump Tower, inexplicably surviving. The criminals manage to get away, until police backup quickly arrives and arrests them.