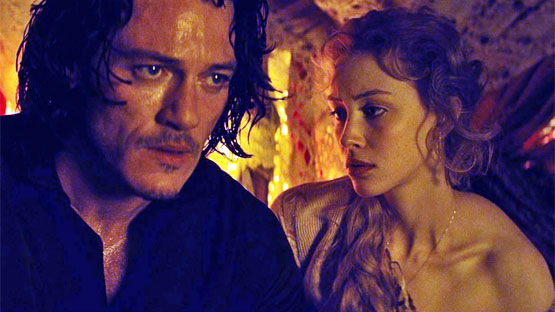 Almost an entire century after the world’s cinematic introduction to Dracula placed audiences under his haunting spell, the studio that pioneered the genre reawakens one of legend’s most captivating figures in an action-adventure that heralds a pulse-pounding rebirth of the age of monsters. Luke Evans transforms from the cursed man history knows as Vlad the Impaler to an all-powerful creature of the night in Universal Pictures’ Dracula Untold, the origin story of the alluring immortal we have come to fear as the sun sets: Dracula. 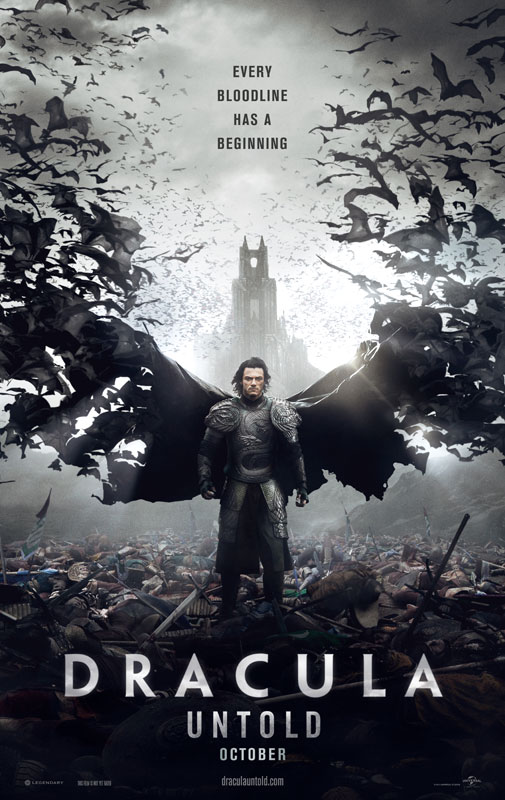 As the London stage-trained Luke Evans was shooting the first chapter of The Hobbit series in New Zealand at the time, many of his early meetings with the filmmakers were conducted via Skype.

Producer Michael De Luca, shares what brought him to the journey of uncovering the monster’s origins: “As a kid, I always wanted to know who turned Dracula into a vampire. I wondered, ‘Was he the first? Were there others?’ It was a delicious, unanswered question that’s not been covered, even in Bram Stoker’s novel.” When a script by the up-and-coming writing team of Matt Sazama and Burk Sharpless landed on De Luca’s desk, it ignited the filmmaker’s imagination.

Finessing an iconic property such as Dracula required a director who could cut through the clutter of everything that had gone before, someone who could extrapolate the story and had the vision to deliver an innovative look at the master of all undead. Upon reading the screenplay, Gary Shore, who had made a name for himself as a striking visualist in commercials and directed a stunning short titled The Cup of Tears, responded immediately. Shore’s articulation of the film as a father/son saga struck the right note with the producer. De Luca commends: “Gary’s vision for what this film should encompass convinced us that he was the right person to do the movie.”

Grounding the character in the real world was also an important element to getting that balance right. Shore: “For this movie to work, you have to care about Vlad’s inner life, as well as his emotional ties to his son and his wife.” Vlad’s difficult choices drive him toward his destiny, and his struggle to save his son from the life forced upon him leads the prince to make the ultimate sacrifice.

It was clear from the beginning that the production team needed a fresh face who could own and embody such an iconic character…someone whose star was on the rise but who did not come with a number of audience preconceptions. Luke Evans had recently made an impression on filmmakers with his portrayal of Bard the Bowman in The Hobbit: An Unexpected Journey, as well as in Fast & Furious 6 as the film’s villain, Owen Shaw.

When Shore began the process of casting Mirena, Vlad’s wife, he had in his mind a woman who was the antithesis of her husband: one who was of purity and light.  Sarah Gadon, who was brought on board the production to portray Vlad’s princess, agrees with her director: “Mirena is the moral compass of the film. She’s the one who is unwavering in her belief and unwavering in her ideas. Every time her principles are tested, she rises to the occasion and fights for them.”  During the casting process, the Canada native shined among her peers, and the decision to cast her came down to her presence. Shore commends the film’s leading lady: “There is something very old Hollywood about Sarah, something classical. ” While Mirena is Vlad’s light and moral compass, Mehmed, played by Dominic Cooper, is his nemesis.

In his set designs, : production designer François Audouy played around with four visual motifs, some of which feature heavily in the Great Hall, with the most iconic being fangs. Audouy explains: “With the architecture for Vlad’s world, we ended up using lots of triangles and symmetrical shapes to create a very specific form of language. If you look at the detail in the Great Hall, you see a lot of triangles and canine-type shapes, which seemed like a good fit to his character. So we have subtle cues to teeth and toothlike shapes in the architecture of the castle. If you look at the castle in silhouette you’ll see fangs in the very top part, and lots of details within the architecture itself are triangular and pointy in a fun way.”