In this spectacular action-adventure, the survival of mankind hangs in the balance as an unexpected mortal hero Bek (Brenton Thwaites) undertakes a thrilling journey to save the world and rescue his true love. In order to succeed, he must enlist the help of the powerful god Horus (Nikolaj Coster-Waldau) in an unlikely alliance against Set (Gerard Butler), the merciless god of darkness, who has usurped Egypt’s throne, plunging the once peaceful and prosperous empire into chaos and conflict. 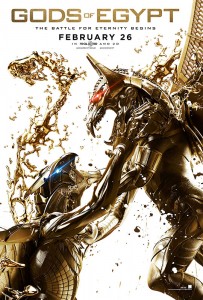 White actors make up most of the principal cast of Gods of Egypt. When Lionsgate began marketing the film, the Associated Press said the distributor received backlash for “ethnically inaccurate casting”. Lionsgate and director Alex Proyas both issued apologies.

The power of ancient myths and the imagination of today’s most gifted storytellers have come together for the rousing action/fantasy/adventure Gods of Egypt, a grandly entertaining spectacle that transports audiences into a vivid universe of larger-than-life figures locked in epic battle.

Imagine a world carved from stone and gilt in gold. Visually futuristic, this realm conjures an alternate world where ancient gods live among mortals. This coexistence between beings existed so long as there was peace, but the trust between man and god has been shattered by hubris, jealousy and betrayal as the destruction of all creation dawns nears.

Visionary director Alex Proyas has created an otherworldly Egypt, beyond time and history, in which moviegoers voyage through dazzling cityscapes, mythological characters, and epic heroism in this pulse-pounding, fantasy action-adventure. Proyas envisions a completely unique, one-of-a-kind world by combining the timeless art of storytelling and the latest in digital cinema technology.

Writers Matt Sazama and Burk Sharpless sought to give audiences a thrilling, elaborate adventure that is part homage, part invention and fully inhabitable as a transporting experience. Using the Osiris myth as a blueprint – Gods of Egypt re-imagines the tale of the sun god Ra, his vengeful son Set and Ra’s dutiful grandson Horus, folding several classical narratives into one adrenaline-pumped film following the journey of a mischievous mortal who joins forces with a fallen god to save all of creation from chaos and tyranny.

Bringing to life a complex array of fictional characters, Gods of Egypt is an original story unlike anything viewers have seen.

Creating the luxurious, fantastical world of Gods of Egypt required contributions from across the globe. Though filming primarily took place at Fox Studios in Sydney, Australia, the filmmakers occasionally incorporated the surrounding setting of Sydney’s Centennial Parklands into the eye-popping cinematic landscape. A truly international production, Gods of Egypt is a collaborative feature drawing creative and technical teams from around the world.

The film’s stunningly visual experience, intricate special effects and detailed setting are the result of some of the industries most talented artists including Australia’s Iloura and Rising Sun Pictures as well as cutting edge VFX, animation and design companies from the United States, Tippett Studios, who assisted in stop-motion and computer generated animation; and Aaron Sims Company, who played a key role in character design.