Set in a nameless feudal society, LAST KNIGHTS tells the timeless tale of a fallen warrior and his enduring loyalty to the master who redeemed him from the despair of his dark past. The film follows Commander Raiden (Clive Owen) and his band of warriors as they wage battle against the corrupt ruler Geza Mott to avenge the unjust death of their honorable leader Lord Bartok (Morgan Freeman). 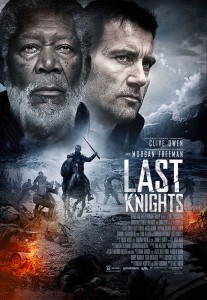 The entirety of the film’s 10-week shoot took place in the Czech Republic, during which local production services were provided by Czech Anglo Productions.

With its universal themes, LAST KNIGHTS indeed hearkens back to the Japanese legend of 47 Ronin and classic films such as Seven Samurai and its American remake The Magnificent Seven, however, it does not fall squarely into the genre of samurai film.

When director Kazuaki Kiriya first approached Lucy Y. Kim to produce LAST KNIGHTS, he already had Oscar® nominee Clive Owen attached to the project and Michael Konyves’ finished script in hand. Once aboard, Kim and Kiriya embarked on another three years of development during which they began to seek out financing and conceptualize the overall look of the film.

From the onset, Kiriya was intent upon casting globally with no regard to nationality, language or skin color.  Owen recalls: “the first time he ever spoke about it, he said ‘I just want to cast the best actors and I don’t care where they’re from. It’s not going to be set in Asia or in the West or anywhere” Kiriya says that Owen exceeded his already high expectations with his turn as Raiden. “He just gave the character so much more depth.” Freeman very much enjoyed playing a lord for the first time in his lengthy career. “He’s a man of some great honor but he’s from a feudal system. He looks upon himself as a protector of the people who live on his lands and work his lands,” he says of Bartok.

Similarly, when award-winning Iranian actor Payman Maadi suddenly became available for the role of the Emperor, Kiriya was beyond thrilled. “I just could not believe that I could get Payman for this role. I saw A Separation and I was like ‘wooooow,”

LAST KNIGHTS was originally to be shot on location in India but when scheduling issues rendered filming there logistically impossible, the filmmakers had to nimbly devise a new plan. Production designer Ricky Eyres, who had filmed in Prague several times previously, convinced the filmmakers that the Czech Republic could easily meet their narrative needs if the script were altered slightly to reflect a more European climate and aesthetic.

After the filmmakers’ challengingly brief seven-week prep period in Prague, ten weeks of principal photography kicked off in November of 2012. The majority of the shoot took place on dozens of locations throughout the Czech Republic and included a several-day-shoot at Barrandov Studios in Prague.

The team extensively scouted some of the most stunning locales the country has to offer, including medieval castles, chateaux and monasteries such as Dobris, Hluboka and Kladruby, then assembled their visually intriguing tapestry from them. The villainous Geza Mott’s compound, for example, comprises diverse elements from five separate locations including Krivoklat Castle, Dobris Chateau, Horin Castle, Chotesov Monastery and the National Museum in Prague.

Kiriya and the producers brought aboard YOUNG CHOI of Korea’s Mofac Studios to produce the visual effects on LAST KNIGHTS and help the director achieve this unorthodox vision. DOOHONG JUNG serves as the film’s stunt coordinator and action unit director. Kiriya remembers first being impressed by the raw, kinetic energy of Jung’s work in Chan-Woo Park’s revenge classic Old Boy.