In a time of enchantments when legends and magic collide, the sole remaining warrior of a mystical order (JEFF BRIDGES) travels to find a prophesized hero born with incredible powers, the last Seventh Son (BEN BARNES). 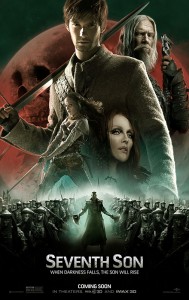 Academy Award® nominee Sergei Bodrov directs Seventh Son from a screenplay by Charles Leavitt and Steven Knight and a screen story by Matt Greenberg, based on the book series “The Last Apprentice” by author Joseph Delaney, whose book series “The Last Apprentice” has become a worldwide phenomenon. Even before the book’s release in the U.S., producers at Thunder Road Pictures had discovered the intriguing tale while on a trip to London. “We’ve been working on the project for almost a decade now,” says Seventh Son co-producer Erica Lee.

What intrigued the producers was how to tell the filmic version of a story about ancient magical forces challenged by the knowledge of Master Gregory and the Falcon Knights who served before him. To get the film green-lit, the principals turned to their colleagues at Legendary Pictures for assistance. Legendary loved the project and jumped at the chance to make it, believing it dovetailed into its wheelhouse of large-scale intellectual property. For Thunder Road, the film would provide an opportunity to work with Russian director Sergei Bodrov, whom they had been chasing for years.

For Master Gregory, the team needed an actor who “could play grumpy and taciturn and irascible, aged but still lively and youthful, charming when he wants to be and has a great physicality.” The filmmakers felt that Oscar® winner Jeff Bridges fit that bill.

For Julian Moore, accepting the role of Mother Malkin, who still harbors feelings for her former lover, Master Gregory, meant the opportunity to play a unique character, as well as to reunite with an old friend. She and Bridges had not worked together since 1998’s The Big Lebowski, but she was up for the challenge.

To film the epic action-adventure, production utilized several locations around Alberta and British Columbia. The eerie landscape of Drumheller, Alberta, served as the film’s opening location: the site of Mother Malkin’s imprisonment. Nearby Kananaskis Country’s Fortress Mountain, with its mesa on top and unique geology, stood in for Pendle Mountain, where Malkin rallies her lieutenants. In B.C., the remote Widgeon Slough, nestled in the coastal mountains of Pinecone Burke Provincial Park, served multiple duties—with its large freshwater marsh, nearby river and grassy plains that give way to the rainforest.

Perhaps the most memorable location, though, was Ward farm, built on the beach of the ethereal Minaty Bay, on the eastern shore of nearby Howe Sound. In the picturesque isolated bay, the design team assembled the pieces of the Ward homestead, constructed to resemble a small subsistence farm built on the ruins of an earlier, possibly Roman, farm.

It wouldn’t be a sci-fi action-adventure film without fight scenes and intense visual effects. For Seventh Son, the mask of DeSantis’ Tusk began as a digital sculpture and then, once the look was approved by the director, a live cast was made of DeSantis’ head. The face was sculpted in clay and then painted, and the hair was attached. The attention to detail was remarkable.