When the world’s biggest star vanishes and his captors demand an enormous ransom for his safe return, it will take the power of Hollywood’s biggest names to solve the mystery of his disappearance. Bringing the audience along for a comic whodunit that pulls back the curtain and showcases the unexpected humor and industry drama found behind the scenes, Hail, Caesar! marks the Coens at their most inventive. 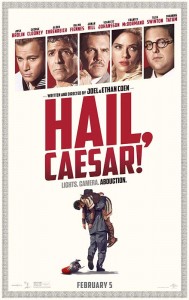 This kind of meticulous research and detail extended even to dressing and casting the film’s extras. In all, 2,500 to 3,000 outfits were needed for the film, including about 500 that had to be custom-made

The comedy is produced by Joel and Ethan Coen through their Mike Zoss Productions, alongside Working Title Films’ TIM BEVAN and ERIC FELLNER (The Theory of Everything, Les Misérables), who have partnered with the brothers since their Academy Award®-winning Fargo.

Hail, Caesar! is an homage to Hollywood’s “Golden Age”, a valentine to the studio system laced with a lovingly acerbic edge. The film celebrates the dream factory, while cleverly pulling back the curtain to reveal some of the less-than-flattering inner workings of the film business in its heyday.

The idea for Hail, Caesar! originated more than a decade ago, according to George Clooney, the Oscar®-winning actor who appears as the vain and spoiled Baird Whitlock, the star of the Biblical epic Hail, Caesar!, which gives this film its name. Clooney was starring in another Coen brothers’ project when the filmmakers approached him. “At the time,” Clooney recalls, “they asked if I wanted to play this actor who gets kidnapped. They had about three pages of plot written down and a few terrific lines. That’s it. Of course, I said, ‘Yes.’” Over the years, when journalists asked Clooney about his upcoming projects, he’d inevitably mention Hail, Caesar!. “It even showed up on IMDB,” Clooney laughs. “But here’s the thing. There was no script.”

Joel Coen reaffirms the story: “It’s true. Finally, we got so much grief, that we decided to sit down and write the script. Besides, it was time. If we waited much longer, everyone we wanted for the film would be too old for their roles.”

For his part, Working Title’s Eric Fellner was pleased to be back on board with the Coens. He reflects: “Tim and I have been so fortunate to work with Joel and Ethan for so many years. This film is not only a culmination of their work, it’s a reflection of their love of the industry. It’s no surprise that so many of their favored performers have returned to be a part of it, and we so appreciate the obvious care for the material and unparalleled craftsmanship they’ve delivered.”

Reflecting the glitter of the star machine during the 1950s, the filmmakers have assembled a powerhouse of contemporary talents whose wattage is as bright as during Hollywood’s heyday, starting with the central character of Eddie Mannix, the world-weary, overstressed studio fixer played by Josh Brolin.

One of Mannix’s partners in crime is Capitol Studios’ film editor, C.C. Calhoun, played by Oscar®-winning actress Frances McDormand, who runs a tight ship, she assures us, allowing anyone near her state-of-the-art Moviola strictly on an invitation-only basis. “Actors are never allowed into the editing room,” McDormand advises. “They get too self-conscious about their work.”

Another crucial piece of casting was Clooney who, in Hail, Caesar!, adds to his oeuvre of playing what he calls “idiots” in Coen brothers movies, which he’s done three previous times—in O Brother, Where Art Thou?, Intolerable Cruelty and Burn After Reading. But the character of Baird Whitlock, he says, “is maybe the dumbest character I’ve played for them. He’s just a clueless movie star, which of course could never happen in real life, now could it?” he grins.

Burt Gurney, the character played by Channing Tatum, is every inch a movie star.

In the midst of the disappearance, another problem Mannix has to fix is DeeAnna Moran, played by Scarlett Johansson, who starred in the Coen brothers’ drama The Man Who Wasn’t There at the age of 15. Johansson prepared for her water-ballet sequence by practicing swimming with her mermaid fin on in “a really grimy pool in Midtown Manhattan,” she laughs.

Mesha Kussman, the director of the synchronized swimming group Aqualillies, was brought on to handle a sequence that took place entirely on the surface of the water. She explains: “Joel and Ethan had a very specific vision. All the floating had to be graceful and beautiful, just like in the old movies. We agreed on 32 synchronized performers who would swim in lyrical patterns that would change, creating a kaleidoscopic illusion. Thirty two was the exact number we needed to give the feeling of an infinite number of swimmers going around in a perfect circle and still give Scarlett enough room to dive in between them.”

Whenever Eddie needs a witness or a third party, he turns to Joe Silverman, who is played by Jonah Hill. Thora and Thessaly are both played by Oscar® winner Tilda Swinton. “They’re identical twins who like to believe the other one doesn’t exist,” she observes.

The extras casting director, Debbie Delisi, had a knack for handpicking faces that were period appropriate. “Some people look very contemporary, no matter what you do. Then you have to worry about hair length and finding women who hadn’t dyed their hair or had Botox, which is not easy in Los Angeles,” she laughs.

Hail, Caesar! was production designer Jess Gonchor’s sixth outing with the filmmakers, starting with their Oscar® winner for Best Picture, No Country for Old Men, and including his own Oscar®-nominated work on True Grit.

Gonchor and his crew eagerly dove into researching the various kinds of films being shot for the movie, as well as the behind-the-scenes look at filmmaking back in the ’40s and ’50s. He was fortunate that, at the time, studios had a photographer on set who recorded the look of the movies. He not only had access to a rich lode of archival material but actually picked the brains of craftsmen from the era who are still alive and were quite eager to share their knowledge.

A big difference was the look of the crew on set, Gonchor points out. “Now it’s blue jeans and T-shirts, but in the 1950s the men wore pants and some wore suits. People smoked on the set, and the equipment was huge.”

Working alongside 13-time Oscar®-nominated cinematographer Roger Deakins and costume designer Mary Zophres, both longtime Coen brothers veterans, Gonchor and his team used color to differentiate the environment of Capitol Studios and the sets where the different movies were being shot. Zophres, whose work for the Coen brothers earned her an Oscar® nomination for True Grit, started researching Hail, Caesar! even before it was greenlit, based solely on a meeting with the filmmakers.

Beneath the humor, says Ralph Fiennes who plays director Laurence Laurentz , Hail, Caesar! is truly a microcosm of the entertainment business. “It looks at the hierarchies, the vanities, the insecurities and loneliness. It looks at the dream of success and the heartbreak of failure. It shows how human vulnerabilities are exposed and magnified within the movie and theater world.”