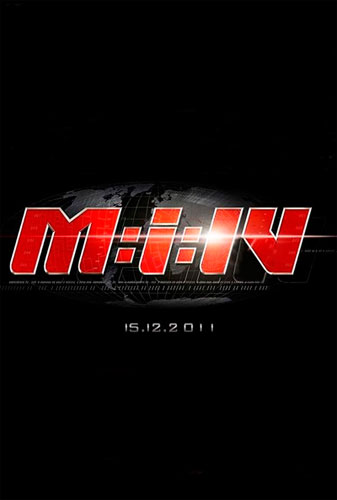 It stars Tom Cruise, who reprises his role of IMF agent Ethan Hunt.

The film, directed by Brad Bird, has been written by J. J. Abrams, André Nemec and Josh Appelbaum. It is produced by Abrams, Cruise and Paula Wagnerand will be released in the United States on December 16, 2011.

When a terrorist bombing destroys the Kremlin, the United States government activates “Ghost Protocol” and disavows the entire Impossible Mission Force. Ethan Hunt and his team are blamed for the attack, but are allowed to escape as part of a plan to enable them to operate outside their agency. Hunt is warned that if any member of his team is captured or compromised, they will be charged as terrorists planning a nuclear strike. He is forced to work with fellow IMF agent Brandt, who knows much more about Hunt and his past than Hunt himself.

The film was originally announced with a working name of Mission: Impossible 4, and codenamed “Aries” during early production. Rumors initially mentioned that the film might not even carry the Mission: Impossible name, though this was later discounted.

Principal photography began by September 30, 2010. Pictures of the set were leaked to the internet showing Cruise in a Russian officer disguise. Filming take place in Dubai, Prague, Moscow, Mumbai, and Vancouver. The film is partially shot with IMAX cameras.