Biutiful is a drama film directed by Mexican director Alejandro González Iñárritu and starring Javier Bardem. It is Iñárritu’s first directorial feature since Babel and his first film in his native Spanish language since his debut feature Amores perros. 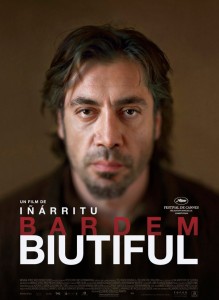 Biutiful is about a man embroiled in shady dealings who is confronted by a childhood friend, now a policeman.

The film follows Uxbal (Bardem), an underworld figure and devoted single dad, through his attempts to reconcile with a past love and secure a future for his children as his own death draws near.
The film is one of five productions in a $100 million deal between González Iñárritu, Alfonso Cuarón, and Guillermo del Toro, as well as the film companies Cha Cha Cha, Universal Pictures, and Focus Features International.

A steady accretion of harrowing details, Biutiful represents something of a departure for Alejandro Gonzalez Iñárritu, even as it confirms the pervasive bleakness of his worldview. Calling it a “less invested in themes of fate and convergence than his previous work, this gritty, slow-burning melodrama nonetheless offers a very long descent into a private purgatory, and its scant emotional rewards can’t shake off the sense of a prodigiously gifted filmmaker stuck in a grim rut.” On Javier Bardem, Sean Penn called it the “best performance since Brando in The Last Tango in Paris.”

The film competed for the Palme d’Or at the 2010 Cannes Film Festival. It premiered at Cannes on May 17, 2010, with Bardem winning for Best Actor, an award shared with Elio Germano for La Nostra Vita.