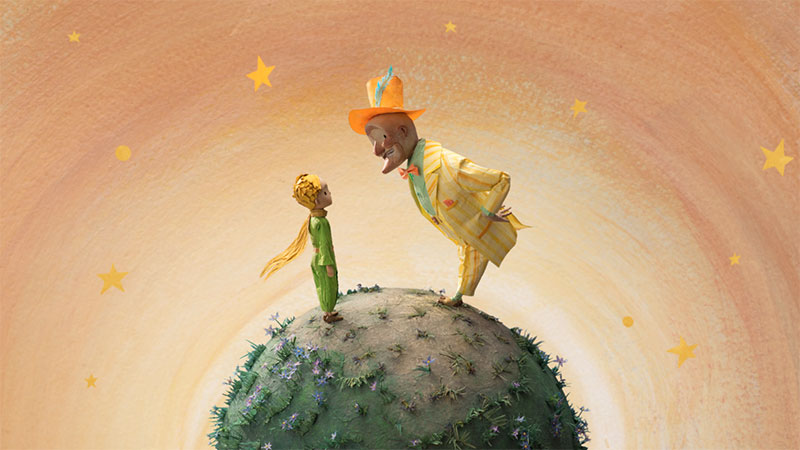 At the heart of it all is The Little Girl (Mackenzie Foy), who’s being prepared by her mother (Rachel McAdams) for the very grown-­‐up world in which they live – only to be interrupted by her eccentric, kind-­‐hearted neighbor, The Aviator (Jeff Bridges). The Aviator introduces his new friend to an extraordinary world where anything is possible. A world that he himself was initiated into long ago by The Little Prince (newcomer Riley Osborne). 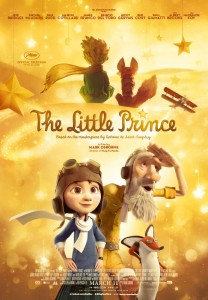 THE LITTLE PRINCE marks the first time actress Rachel McAdams has lent her voice to an animated project.

The long, rewarding journey to adapt Saint-­‐Exupéry’s classic work into a modern animated film began over eight years ago when French producers Aton Soumache, Dimitri Rassam and Alexis Vonard got the go-­‐ahead from Olivier d’Agay, president of the Saint-­‐Exupéry Estate, to develop a theatrical feature based on the property. “We felt an enormous responsibility to do justice to this timeless novel, which is loved by so many people around the world,” says Soumache. “Anyone who reads the book has their own personal impression of the Little Prince and his world, so it’s not possible to do a straight-­‐forward adaptation. I remember my father reading the book to me even before I went to school, and many people have a very strong personal connection to this work. So it was very important for us to find a director who could imagine a new way of approaching this book.”

Both Soumache and producer Dimitri Rassam believe that they struck gold when American director Mark Osborne agreed to helm the movie. “At first Mark didn’t want to even think about it because it was too important a work, but we knew he could do a great job,” says Soumache. “He had already directed DreamWorks’ “Kung Fu Panda” which featured two very crucial Chinese cultural elements—Kung Fu and the panda—and that movie was unanimously loved and praised in China. He had found a way to take that subject very seriously. When he agreed to think about The Little Prince, he went 5 away and thought very hard about it. Six months later, he came back with a pitch that blew us all away.”

Mark Osborne recalls the day he first heard about the project from his agent. “Back in 2009, my agent asked me if I knew of the book, because two French producers wanted to make a big animated movie based on it,” he remembers. “I knew the book very well and that’s why my first instinct was to say no. I believed that there was no way you could do a straight adaptation. But I thought about it more and I realized that the material was just too good to say no to.”

Fortunately, both the author’s estate and the producers loved the director’s passionate pitch. In October of 2010, Osborne put together a small team of artists and writers in Los Angeles to brainstorm and create concept art and the first draft of the screenplay. Then Osborne moved with his family to Paris to begin work on the pre-­‐ production of the film. Once there, a team of storyboard artists, look dev artists, character designers and production pipeline experts was assembled to begin the process of making the dream of the movie come true.

The director says that during this time, not only was he pitching to artists and actors, he was also pitching the movie to distributors all over the world using a “magic suitcase” full of hand-­‐made visual aids specifically create to communicate the tone and passion for the project. “Over the last four years I think I have pitched the movie close to 400 times,” he recalls.

As it turns out, the journey to bring THE LITTLE PRINCE from the page to the screen also benefited from an unusual production history. The project, which began with Osborne and his small team in Los Angeles, then moved to Paris during the development and storyboard stages. For the final phases of the animation, production and lighting, the team moved to Montreal in order to maximize the tax benefits offered to a French-­‐Canadian project (a co-­‐venture between Onyx Entertainment in Paris and Mikros in Montreal).

“It’s quite different from making a movie at DreamWorks where you use all the in-­‐house talent,” explains Osborne. “We hired everyone from the outside and established our own independent production company and developed our own animation pipeline based on what we needed. It provided us with a great opportunity because we weren’t tied down to any existing structures. On the down side, we were building the tracks while the train was running, so it was quite scary too.”

One of the standout qualities of THE LITTLE PRINCE production is that it attracted both the crème de la crème of the animation industry in Europe as well as many talented veterans of the major animation studios in Los Angeles. The film’s head of story and writer Bob Persichetti has worked on features such as “Tarzan”, “Mulan” and “The Hunchback of Notre Dame” at Disney, and “Shrek 2”, “Monsters vs. Aliens” and “Puss in Boots” at DreamWorks. He remembers the day he got a call from Osborne to join his team in the beginning of 2012. “I remembered Mark from DreamWorks, but we had never worked together on a movie, so I jumped at the chance to help out with the story along with a small team of storyboard artists.”

Thanks to the director’s emotionally engaging pitch and the global popularity of Saint-­Exupéry’s book, a perfectly matched group of A-­‐list actors were able to be recruited to lend their voices to the film’s characters. As Osborne explains, “It began with Jeff Bridges. He was our first and only choice to play the Aviator, so after a great deal of time trying to get to him, I finally got the chance to go to his home in Santa Barbara to talk to him directly. He was blown away by the pitch, and it really put us on the road to assembling the perfect cast.”

To create the music for THE LITTLE PRINCE, the filmmakers sought the expertise of Oscar-‐winning composer Hans Zimmer, the man behind the award-winning soundtracks for dramatic films such as “The Dark Knight”, “Gladiator” and “Interstellar” and animated films including “The Lion King” (for which he received the Academy Award®), “Kung Fu Panda”, “Madagascar: Escape 2 Africa” and “Despicable Me”.