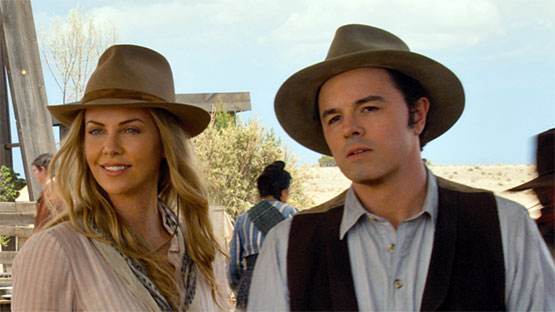 Seth MacFarlane once again stretches the boundaries of comedy and propriety as writer, producer, director of and actor in A Million Ways to Die in the West. He tells the tale and plays the lead in the story of Albert Stark, a soft man in hard times who is trying to figure out how to escape this godforsaken frontier that seems to be trying to kill him—and everyone else in it—at every turn. A sheep farmer whose fickle girlfriend, Louise, leaves him when he backs out of a gunfight, Albert feels like a chump. 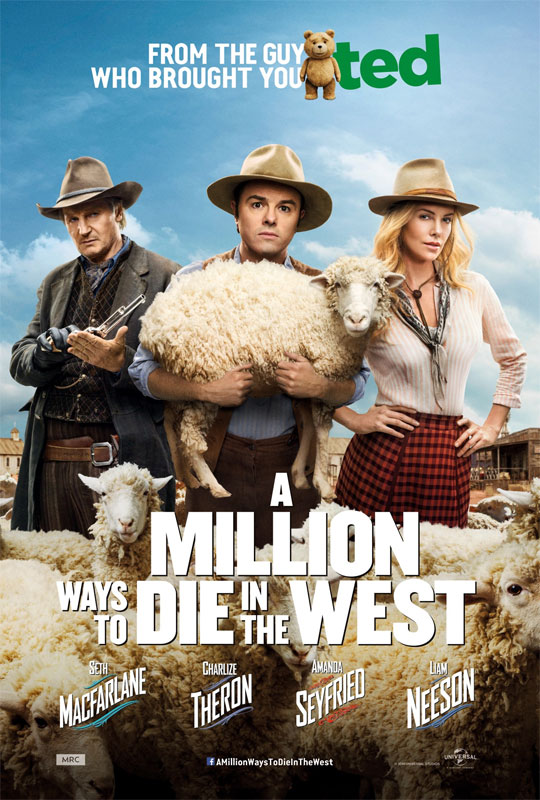 Despite the beautiful scenery depicted, the set of A Million Ways to Die in the West was also hit with daily dust storms—much like in the Old West. Cast and filmmakers alike felt that this was one of the most weather-active locations in which they’ve filmed.

A Million Ways to Die in the West stars Charlize Theron and Liam Neeson and also co-stars a comedic lineup of MacFarlane favorites including Ralph Garman as Dan, one of the more colorful Old Stump locals, and Alex Borstein as Millie, the madam of the whorehouse who can’t quite put her finger on her best employee’s oddly chaste relationship with Edward.

As Seth MacFarlane and fellow writers Alec Sulkin and Wellesley Wild were putting the final touches on their soon-to-be blockbuster feature debut, Ted, they were taking a break and watching Clint Eastwood in director Ted Post’s classic Western film Hang ’Em High. The old friends and collaborators started pitching jokes and riffing on the idea of creating an unconventional Western, and they soon decided that a comedic twist on the genre should be their next project together.

While the team wanted the setting to be the Old West, they felt the need to infuse the characters with a modern-day sensibility, especially Albert Stark, the story’s protagonist. Wild offers: “This was Seth’s idea from the beginning: how to stick a knowing, observant guy into a world where he just doesn’t belong…where everything is just terrible. Albert is not suited for it. This guy is a fish out of water, and he shows what an unbelievable nightmare it would be to live in this time and place.”

Fellow Ted producer Jason Clark was thrilled to reteam with MacFarlane, Sulkin, Wild and Stuber for a never-before-told Western. He offers: “What I admire about working with Seth, Alec and Wellesley is that every story that they create with their jokes is grounded in a story that we care about. So, as an audience member, there’s something to hang your hat on; there’s someone that you’re rooting for. The thing that Seth always has is the ability to bring heart and warmth, even with these outrageous jokes.”

Since A Million Ways to Die in the West is set in the Old West in the 1880s, the filmmakers decided to travel to Santa Fe, New Mexico, to tell the tale. The town of Old Stump was created at the Bonanza Creek Ranch, just south of Santa Fe. The ranch is spread out over thousands of acres and features more than five ponds, one movie town and two home sets. More than 130 movies, as well as various videos, commercials and catalog shoots, have been filmed there.

For the sounds of his comedy, MacFarlane would select Emmy Award winner Joel McNeely to compose the film and Rich Breen to mix it expertly. The director had worked with both men on “Music Is Better Than Words”.