The Lincoln Lawyer is an American mystery suspense thriller film adapted from a novel of the same name by Michael Connelly, starring Matthew McConaughey and Marisa Tomei. The film is directed by Brad Furman, with a screenplay written by John Romano. 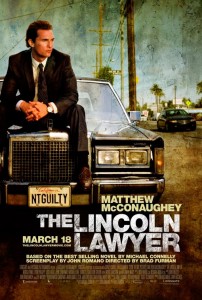 The Lincoln Lawyer is the tale of a lawyer who conducts business from the back of his Lincoln town car while representing a high-profile client in Beverly Hills.

L.A. criminal defense attorney Mickey Haller (Matthew McConaughey) signs on to defend slick, suave playboy real estate agent Louis Roulet(Ryan Phillippe). Roulet has been charged with assault, and his overbearing mother will do anything to clear the son’s name. Cost is no issue – Mickey has his first high-paying client in years. Digging into the case, Mickey and P.I. Raul Levin reveal a blacker picture of Roulet’s personality and evidence of a sinister past. Another sudden death and new links to a notorious double-homicide, make Mickey question if he’s finally in over his head. His pursuit becomes a question of morality and even a question of his own mortality.

The lawyer has spent all his professional life afraid that he wouldn’t recognize innocence if it stood right in front of him. What he should have been on the watch for was evil, evil as pure as a flame.

The setting here is the lawyers mobile “office” (back seat of a Lincoln town car) involving actual events and locations in L.A. This story emerged and grew after author Connelly once met a real-life “back seat” lawyer.