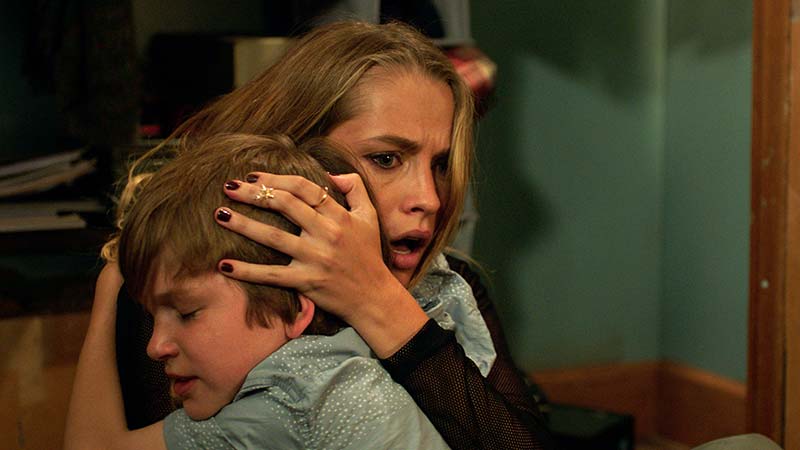 When Rebecca left home, she thought she left her childhood fears behind. Growing up, she was never really sure of what was and wasn’t real when the lights went out…and now her little brother, Martin, is experiencing the same unexplained and terrifying events that had once tested her sanity and threatened her safety. A frightening entity with a mysterious attachment to their mother, Sophie, has reemerged. 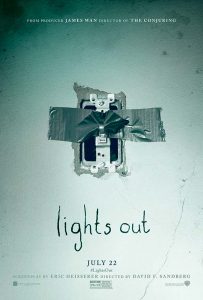 Making his feature film debut with “Lights Out,” David F. Sandberg has written and directed a slate of short films and earned a throng of internet devotees who expect him to scare the wits out of them. “Lights Out” is based on Sandberg’s recent horror short of the same name, and it was both the quality and the impact of that insomnia-inducing gem that brought the young Swedish filmmaker to the attention of Hollywood.

Producer Lawrence Grey recounts: “It was only about a year ago that David made the short in his apartment in Sweden and uploaded it to social media, where it started getting a lot of buzz. It was incredibly powerful and frightening. I see a lot of films, but this one really stood out. It has north of 100 million views now, so I wasn’t the only one who felt that way. I contacted David and we started talking about making a movie and who would be the best partners for it,” Grey continues. “My top choices were Eric Heisserer, a phenomenal writer, who became our screenwriter and a producer, and James Wan, who’s just a force of nature, full of creative energy. They were both very excited about the idea, so it was a dream team from the start.”

Their intent was not to remake the short, but to draw from it an original demon with its own sinister logic and agenda. Heisserer explains, “We created a whole new mythology with this character.”

Equally important was capturing what made Sandberg’s model so jump-out-of-your-skin scary, born of the director’s passion and insight, as well as those unexpected glints of humor that horror fans love. “It’s essential to find a director who understands how to construct fright scenes and how to build tension and suspense, and it was clear to us from his work that David has the instinct for it,” says Wan, who delights in encouraging new talent.

“Rebecca has commitment issues and other difficulties she’s dealing with, because she just never got over what happened when she was a child. Teresa Palmer is amazing in bringing all of this to bear in her performance. Her emotions feel so real.” says director Sandberg.

Like Rebecca, Bret presents a tough façade to cover a fundamental sweetness, which is likely how he sees so clearly through her own act and why he hangs around, despite her constant attempts to keep him emotionally at arm’s length. Alexander DiPersia, who takes on the role, says, “He’s got some tats and chains and he’s in a death metal band, but he’s actually a sincere and reliable guy, although Rebecca constantly expects him to take off.”

Martin, played by then-10-year-old Gabriel Bateman, is characterized by Heisserer as “wiser and older than his years. Off-screen, the young actor mirrored his character’s maturity and focus in ways that didn’t go unnoticed by his colleagues. “We looked at probably thousands of actors and he was out ahead by a country mile,” Grey says, noting that the clincher was how Bateman handled a curve during his audition. “These kids had been rehearsing lines for weeks and got them to perfection, and we wanted to shake that up. So, David took a flashlight and would say, ‘Pretend this is your flashlight and I’ve taken it from you and you want it back.’ We did that with a bunch of kids and they generally took a kind of passive approach, but Gabriel would not stop beating the crap out of David to get that flashlight back! He had an incredible ferocity so we knew we could throw anything at him and he could come through like a champ.”

Rather than employing CGI, the filmmakers chose the practical option – letting makeup, prosthetics, lighting, and the skill of actress/stunt performer Alicia Vela-Bailey manifest Diana. They found this approach produced a specter infinitely creepier and more shocking than what they might have achieved digitally. “Ninety-five percent of the time, Diana is just a silhouette, so movement becomes everything,” Sandberg emphasizes. “Alicia is astonishingly athletic,” says Grey of the former competitive gymnast, whose contortions as Diana give the character both a human and bizarrely inhuman posture.

For a scene in which Diana goes after Bret, a stunt double was needed as there was more height involved, a rough landing on what looks like concrete but was actually high-density foam, and a specialty rig that slowed the performer down just enough before impact.

Following the filmmakers’ desire for as much of a natural and realistic feel as possible, “Lights Out” was captured almost entirely on location in the Highland Park district of northeast Los Angeles, with additional practical locations found Downtown. The shoot reunited several principals who worked previously with producer James Wan, some of them multiple times, including director of photography Marc Spicer, production designer Jennifer Spence, costume designer Kristin M. Burke and makeup department head Eleanor Sabaduquia.

For Rebecca’s apartment, the team secured a former bank building in the gentrifying portion of North Figueroa at Avenue 56, known by the locals as Lower Fig. They used the entire second floor as a staging area, while three of the rooms – complete with creaky wooden floorboards – comprised the set. It was one of Spence’s favorites.