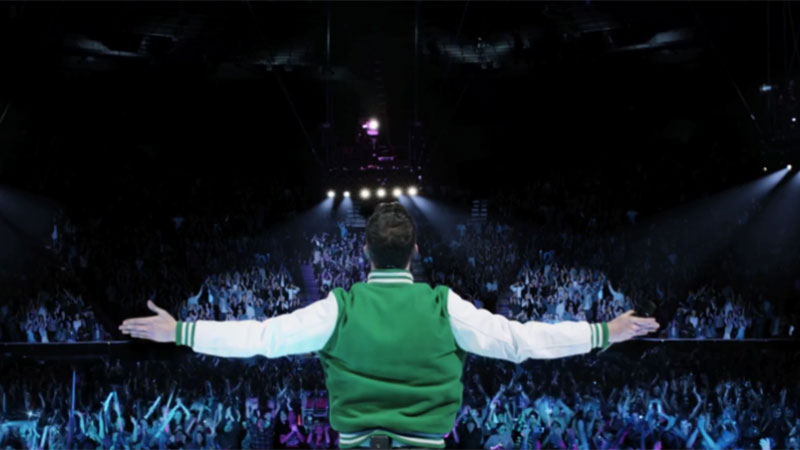 The Style Boyz hit a massive roadblock.  Now that front man Conner4Real went out on his own and left Owen and Lawrence—once dubbed Kid Contact and Kid Brain, respectively—he became one of the biggest acts in the world just as his two best friends faded into the background.  And it’s all about to come crashing down on his vapid head. 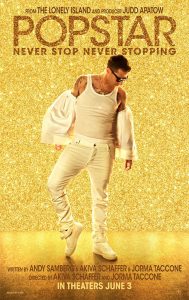 Popstar: Never Stop Never Stopping would have been dead in the water without the brilliant work of composer Matthew Compton and music supervisors Randall Poster and George Drakoulias. Their work alongside the Lonely Island to make the film feel like an actual pop-music documentary was brilliant, exhaustive and years-long.

Starring, written and produced by Andy Samberg, Akiva Shaffer & Jorma Taccone and directed by Shaffer & Taccone, Popstar: Never Stop Never Stopping began its development many years ago when three boys from northern California began the most unlikely of musical journeys.

Once the Berkeley natives christened themselves The Lonely Island, the trio would go on to become responsible for creating the popular Saturday Night Live “Digital Shorts,” which undoubtedly reinvigorated the series and spurred many water-cooler moments over the past decade.

As they collaborated upon their first feature-length screenplay, the three artists created their alter-egos: Conner (Samberg), Owen (Taccone) and Lawrence (Schaffer), also known as the Style Boyz. Just like the Lonely Island, the Boyz have known each other since they were kids, but unlike our filmmakers, they formed a world-renowned hip-hop boy band in which they honed their unorthodox musical talents.

Schaffer admits they finally had the luxury of time when the group decided to write this feature: “We were able to aim higher with this one because we didn’t have to quickly turn it around for a Saturday Night Live air date.”

The guys admit they were inspired by the likes of the early documentary films of such superstars as Miley Cyrus, Justin Bieber and Katy Perry.  “We had talked about this concept for 10 years and then with the advent of so many documentaries on pop stars, it focused us on the story,” offers Samberg.  “Akiva had a casual meeting with Judd, talking about various projects, and Judd said we should definitely make a mockumentary based on all the documentaries in the last few years about pop stars.”

The movie mixes two styles of comedy that have resonated with the public: The absurdist sense of humor of The Lonely Island and the grounded-in-truth humor that has been the hallmark of so many producer Judd Apatow movies—such as Trainwreck, Knocked Up and The 40-Year-Old Virgin.

“This film is all about having fun with the modern fluff music ‘documentary,’” explains Apatow.  “A lot of the current music stars make documentaries about themselves where they are kissing their own asses.  They show their history, their struggles and their relationships with the fans.  Usually, it’s designed to promote an album or a tour.  We thought it would be so funny if you were shooting one of those documentaries…and your life just completely fell apart.”

Filling out the cast for the movie, the trio looked to old friends from Saturday Night Live and The Lonely Island videos, as well as a desire to bring new faces in.

The producer also likens the fact that so many stars agreed to guest star in the film to The Lonely Island’s goodwill.  He says: “A movie like this has so many opportunities for cameos.  A lot of our favorite comedians like BILL HADER, Maya Rudolph and Joan Cusack (as Conner’s mom, Tilly Friel) are a part of it.  Then there are all of the musicians like A$AP ROCKY, USHER and even RINGO STARR.  People had religious experiences just being around Ringo Starr.”

Production began May 13, 2015, at the Big Sky Ranch in Simi Valley, California, which was home to Lawrence’s bucolic farm life.  The team then shot for seven weeks around the Los Angeles area.  “When we set out to make this movie, we wanted to take what we did with ‘Digital Shorts’ for Saturday Night Live, and put everything on a much bigger scale,” explains Samberg.  “There are huge sets, a record full of new songs and the comedy is heightened.”

Production designer Jon Billington came to the project with credits on many action movies. To absorb how to re-create the feel of a live concert, Billington and the filmmakers went to a Maroon 5 concert at The Forum in Inglewood, California, before production began.  That combined with viewings of the One Direction, Justin Bieber and Katy Perry documentaries led Billington to start the process with 3D models and then tested out lighting concepts.

The proposal sequence of wolves was shot at the scenic Saddleback Ranch on Mulholland Highway in Malibu.  A winery that also hosts many weddings, the location also has exotic animals on the grounds as well.  “It was a gorgeous location, but then the randomness of a giraffe in the background just fit in with the ridiculousness of it all,” notes Billington. The scene appears more like a wedding scene, but as Billington observes: “When you have a complete idiot, with far too much money and very little taste who wants to propose to his girlfriend…it makes more sense to design it as a celebrity wedding.”

At its core, the movie (just like The Lonely Island shorts) revolves around the music, all of which was written by Samberg, Schaffer & Taccone. Schaffer adds, dryly: “We took the music we are known for and added more bad words and nudity, all the things you are looking for in a major motion picture.  This is definitely something that has never been done before.”

The music for the group was based in hip-hop while Conner’s solo career featured music that was more straight-up pop with a healthy dose of Auto-Tune.  Among Conner’s hit songs are “Bin Laden” (In Conner’s mind he thinks it’s just a good old-fashioned love song) and “Equal Rights” (Conner’ statement about gay marriage… while at the same time reminding everyone he’s straight).