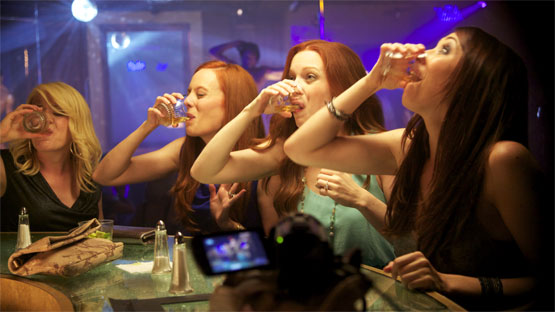 Best Night Ever follows the story of four girls and their quest to find some form of debauchery in Las Vegas before one of their number (Claire) gets married. The four girls, played by Desiree Hall (Claire), Samantha Colburn (Leslie), Eddie Ritchard (Zoe), and Crista Flanagan (Janet), do their very best to have a good time in Las Vegas. 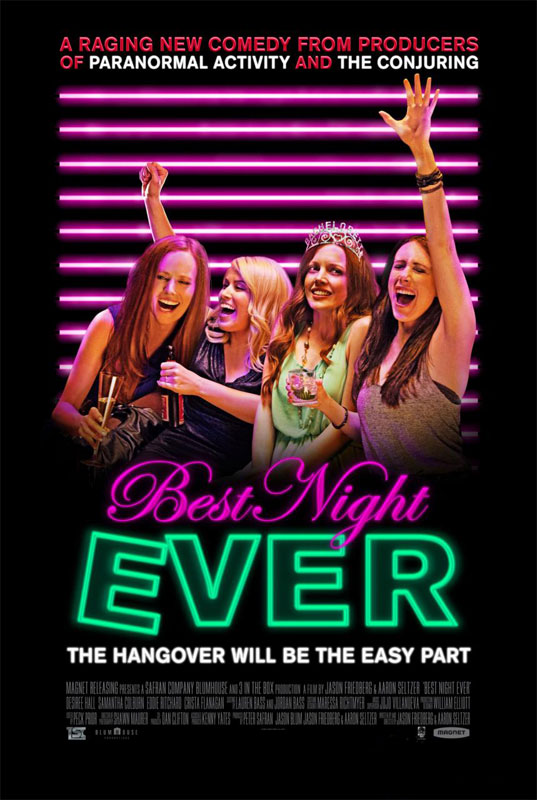 The film was to be shot “found footage” style – as rough and raw as a night-out-gone-wrong in Vegas could be.

Best Night Ever was shot on location in Los Angeles, Palm Springs and Las Vegas over three weeks in July and August of 2012. Written and Directed by Aaron Seltzer & Jason Friedberg.

Going into full prep in June of 2012, the filmmakers were faced with several challenges. The main portion of the film would shoot in Los Angeles with several days of pick-ups in Palm Springs at a casino and in Las Vegas at hotels and the strip. The back streets of North Hollywood and Sherman Oaks were chosen to double for Las Vegas off the strip.

A prominent Indian Casino in Palm Springs was used to double Caesar’s Palace. It also served as a suitable setting for an unforgettable confrontation later in the film involving the four girls, a very skinny, very naked man and a very large and also very naked woman.

To handle the day-to-day slings and arrows of production on the film, Friedberg & Seltzer partnered with longtime collaborator and veteran Producer Peter Safran as well as micro-budget mogul Jason Blum.  Jason and Aaron were excited to shoot a no-holds barred R-rated comedy and their excitement was contagious for the crew. Everyone was really excited to be working on this film.

Lensed by veteran Shawn Maurer, Best Night Ever was shot on a variety of prosumer and professional cameras including the Canon AX10, Panasonic GH2, GoPro system and Sony EX3. All brought a distinct style to the project. Grounded firmly in “found footage” world, the filmmakers were able to smuggle, strategically place and hide different cameras in and around the person of each of the main cast, having them operate the camera themselves much of the time.

During the sequence where the girls travel on the highline on Fremont Street in Las Vegas, each actress is carrying and “operating” a GoPro Hero 2 hacked to shoot at a specific frame rate.

Seasoned cutter Peck Prior, whose credits include Bridesmaids, several of the Friedberg & Seltzer spoof series as well as comedy classic Uncle Buck, carried out the edit. For as many one shot takes or scenes in Best Night Ever, there are infinitely more that have been crazily compiled from a myriad of different shots and angles as our leads bumble from one disaster to another.

Often times, Peck had to maintain the natural feel and flow of the footage while still managing to hide additional crew lurking just around the corner. Shooting in real locations and in tight corners forced the post team to be creative, striking a balance between home video shot on a real iPhone and a project with more of a narrative base.