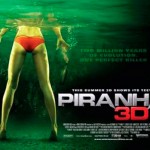 Richard Dreyfuss said that he accepted the role only after Bob Weinstein persuaded him by offering the actor a larger salary. Dreyfuss also stated that the ill-fated character he plays, is a parody and a near-reincarnation of Matt Hooper, the character he portrayed in the 1975 film Jaws.

Fisherman Matthew Boyd (Richard Dreyfuss) is fishing in Lake Victoria, AZ when a small earthquake hits, splitting the lake floor and causing a whirlpool. Boyd falls in and is ripped apart by a school of prehistoric piranhas that emerge from the chasm and ascend the vortex.

Chuck Russell was originally scheduled to direct the film, and made uncredited rewrites to the script by Josh Stolberg and Peter Goldfinger, as well as incorporating the original John Sayles script that Joe Dante directed the first time around. Alexandre Aja was selected to direct the film instead. Production on the film was scheduled to begin late 2008, but was delayed until March 2009. In October 2008, director Alexandre Aja stated filming would begin in the spring. He further stated “it’s such a difficult movie, not only because of the technicality of it and the CGI fish, but also because it all happens in a lake.

We were supposed to start shooting now, but the longer to leave it the colder the water gets. The movie takes place during Spring Break and, of course, the studio wanted it ready for the summer, but if you’ve got 1,000 people who need to get murdered in the water, you have to wait for the right temperature for the water, for the weather, for everything.”

Shooting took place in June 2009 at Bridgewater Channel in Lake Havasu, located in Lake Havasu City, Arizona. Much of one end of the channel was blocked off for boats, some flipped over and some covered in blood. The water was also dyed red for the shooting. Aja cast for his film project Wild Wild Girls, which played bikini starlets on Lake Victoria. Due to constraints with 3D camera rigs, Aja shot Piranha in 2D and converted to 3D in post production using the reali-D conversion process developed by the company, Inner-D.

Unlike other 3D converted films released in 2010, Piranha’s conversion was not done as an afterthought, and it represents the first post-conversion process to be well received by critics.