My Name Is Khan (Hindi: माय नेम इज़ ख़ान); commonly referred to as MNIK, is a 2010 Bollywood film directed by Karan Johar, with a screenplay by Shibani Bathija, produced by Hiroo Yash Johar and Gauri Khan, and starring Shahrukh Khan and Kajol, who reunite after nine years (their last film together was Kabhi Khushi Kabhie Gham in 2001). 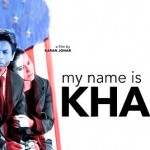 Production of the film is took place in India and the United States. Filming began in Los Angeles during December 2008 and one of the locations used was UCLA. Johar next continued production in Mumbai during April 2009. During June 2009, production moved to San Francisco and the Bay Area, where they filmed a key scene at the Children’s Discovery Museum of San Jose.

It is overseen by both Dharma Productions and Red Chillies Entertainment and distributed by FOX Star Entertainment, which bought the rights for the film for a sum of INR 1 billion, thus becoming the second most expensive Bollywood film, behind Blue. It is also the highest buyover for any Indian film, breaking Ghajini‘s record of INR 900 million.

My Name Is Khan is the fourth directorial venture of Karan Johar. Cinematography is by Ravi K. Chandran, Shankar-Ehsaan-Loy composed the film’s score, choreography is by Farah Khan, and lyrics were written by Niranjan Iyengar. Visual Effects are by Red Chillies VFX.

My Name is Khan debuted in Abu Dhabi, UAE on 10 February 2010. It released globally in cinemas on 12 February 2010. It was also screened as part of the 60th Berlin International Film Festival’s official selection the same month. In the months leading up to its release, the film has also been involved in some controversy related to international airport security and Indian politics.

Upon release, the film broke many box office records, and became the highest-grossing Bollywood film overseas. Within four weeks, the film crossed the INR 700 million mark in India and became the first film of 2010 to do so. In the overseas markets, the film grossed Rs. 90.34 crores ($ 19.25 million). The film was released in India on DVD on 28 April 2010. Blu-ray in India, plus a DVD release worldwide followed on 10 August 2010.

“I think it’s an exceptionally relevant time, as the unity of our nation is of paramount importance, and I am very happy to witness such a movement in front of my eyes.

We are all coming together to fight for a common cause – called humanity. Everyone knows that terrorism has no religion and it will never have a religion. As a filmmaker, I believe that I have a social responsibility and I promise to fulfill that.”

– Karan Johar’s response to the increased unification between Hindus and Muslims in India, especially after 26/11. As said to Madhureeta Mukherjee.

In an earlier July 2009 interview, Khan also noted that the film focuses on themes concerning “the relationship between the Western world and Islam and how that has changed over the past few years.”

He describes the film as about “the journey of one family and how it changes because of 9/11” and suggests “we touch upon that in a very unbiased and educated way.” In another early interview, he also stated that, “it’s not about a disabled man’s fight against disability. It’s a disabled man’s fight against the disability that exists in the world—terrorism, hatred, fighting …

My Name is Khan is also about Islam and the way the world looks at Islam but we are not taking any sides. We are only trying to say that there are only good people and bad people. There are no good Hindus, bad Hindus, good Christians, bad Christians. Either you are a good person or a bad person. Religion is not the criterion, humanity is.”